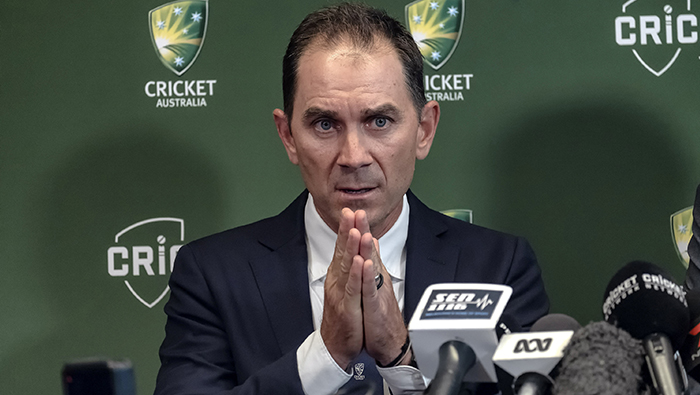 Melbourne: Newly appointed Australia coach Justin Langer will charge his players with winning back the "respect" of the cricket world after a ball-tampering scandal left the team's reputation in ruins.
Long touted as head coach-in-waiting, Langer was named as Darren Lehmann's replacement on Thursday, his predecessor having resigned in the wake of the Cape Town scandal even though he was cleared of wrongdoing.
A gritty opening batsman who played in some of Australia's greatest-ever teams, Langer takes over a depleted side, with disgraced former captain Steve Smith and his deputy David Warner serving year-long bans in the fall-out from South Africa.
"For me, I think one of the things that's really important is we keep looking to earn respect," the 47-year-old told reporters in Melbourne on Thursday.
"To me, respect’s worth more than all the gold in the world.
"It’s not just about how we play our cricket, it’s about being good citizens and good Australians," he said.
Perth-born Langer scored more than 7,500 runs in 105 tests, including 23 centuries, before retiring with a slew of greats at the end of the 2006/07 Ashes series.
He has had success coaching Western Australia state since 2012, guiding Perth Scorchers to three domestic Twenty20 titles in the 'Big Bash', making them the most successful franchise in the tournament's short history.
Appointed coach of Australia's test, one-day and T20 teams for the next four years, Langer's first on-field assignment will be on tour against England next month for an ODI series.
One of his jobs will be to participate in a players' review aimed at improving team culture and conduct, which former players and media pundits have long criticised as boorish and out of step with public expectations.
Uncompromising teams
Like his predecessor Lehmann, Langer carved out a career in some of Australia's most successful and uncompromising teams in the 1990s and early 2000s, led by captains that championed "hard, aggressive cricket" and never apologised for the use of targeted sledging to throw opponents off their games.
He felt Australia's players would need to "modify their behaviour a bit", but said the nation expected their teams to play tough as well as fair.
"The public will be disappointed if we don’t play good, hard, competitive cricket," said Langer, dressed in a dark suit and tie alongside Cricket Australia boss James Sutherland.
"How people view us, that's really none of our business.
"We know in this world everyone's got an opinion. If we go about our behaviours on and off the field really well, those outcomes will look after themselves."
Along with Smith and Warner, young opening batsman Cameron Bancroft was banned for nine months, having been caught on camera with a piece of sandpaper while out in the field during the third test in Cape Town.
Langer said he was stunned that "cricket tragics" Smith and Bancroft had been involved in the ball-tampering, but they and Warner would all be welcomed back into the side if they met "standards" once their bans were served.
A father to four daughters, he also described himself as a "hippy", as well as a mentor, to the amusement of reporters. He is also a man who meditates and spends at least one month a year growing a beard and walking around in bare feet during his down-time.
Rebuilding trust in Australia's dressing room, as well as the cricket world, will be crucial, Langer said.
"We’ll have to work on that," he said. "I would say, without being in it (at South Africa), camaraderie wasn’t as right as it needed to be.
"I've said for years if you’ve got that camaraderie, then it’s like that glue that keeps everything together, particularly when you’re under pressure," he said.