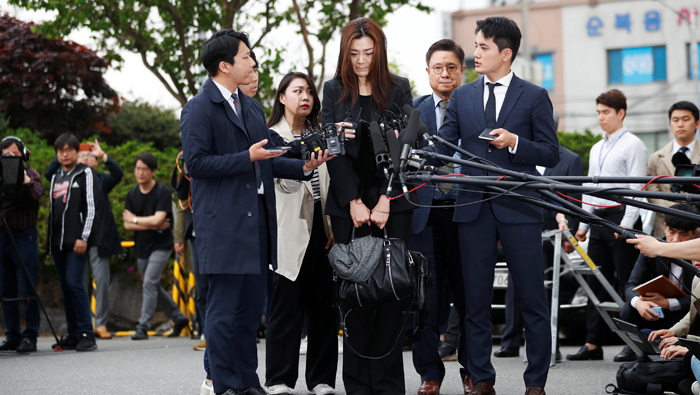 Seoul: With a faltering voice and her head down, the youngest daughter of Korean Air Lines' chairman apologised on Tuesday for a recent angry outburst as she made her first appearance for questioning by police over the incident.
Cho Hyun-min, the younger sister of the notorious "nut rage" heiress of the airline, who got into trouble over a petulant outburst in 2014, is being investigated by police over allegations that she threw a drink at people at a business meeting last month.
"I am genuinely sorry for causing this concern," Cho Hyun-min told a media scrum, before heading to the police questioning as a suspect over possible assault.
Cho's older sister, Heather Cho, made headlines when she lost her temper over the way she was served nuts in first class and ordered the Korean Air Lines plane she was on to return to its gate at a New York airport.
The younger sister's tantrum has reignited public impatience with family-run conglomerates known as chaebol, which dominate South Korea's economy, over what some people see as unchecked bad behaviour by the rich and powerful, especially second- and third-generation children of the founders.
Getting out of a black sedan, Cho, dressed in a black suit, repeated her tearful apology several times without making any further comment. Korean Air Lines declined to comment.
The younger Cho stepped down from her senior position at the airline after her father, Cho Yang-ho, the company chairman, made a public apologising for the behaviour of his two daughters.