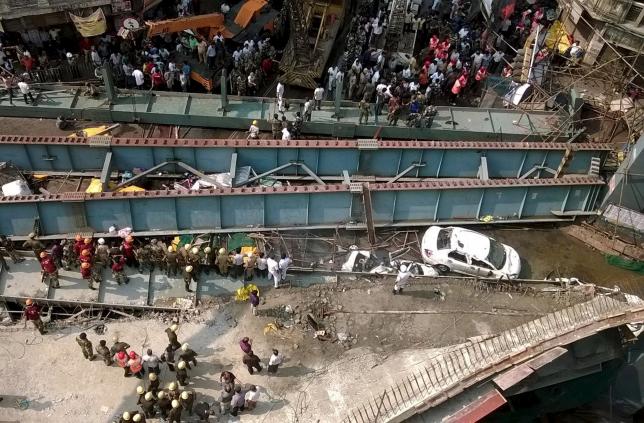 Kolkata: A flyover under construction in the bustling Indian city of Kolkata collapsed on to moving traffic below, killing at least 14 people with as many as 150 people feared trapped, police said.

Residents were using their bare hands to try to rescue people pinned under a 100-metre (110-yard) length of metal and cement that snapped off at one end and came crashing down in a teeming commercial district near Girish Park.

"Monumental tragedy. Rescue ops on. Many feared dead," Derek O'Brien, spokesman for the left-wing party that governs the state of West Bengal of which Kolkata is the capital, said in a tweet.

Chief Minister Mamata Banerjee, seeking re-election in a regional poll next month, rushed to the scene to survey the damage. She faces tough questions over who was responsible.
A newspaper reported last November that Banerjee wanted the project - already years late - to be completed by February. Project engineers expressed concerns over whether this would be possible, The Telegraph said at the time.

Television footage from the scene showed a bloody hand reaching out from under what appeared to be a girder. People were trying to hand bottles of water to survivors pinned underneath.

"The concrete had been laid last night at this part of the bridge," resident Ramesh Kejriwal told Reuters. "I am lucky as I was planning to go downstairs to have juice. When I was thinking about it, I saw that the bridge had collapsed."

A 140-tonne crane brought to the scene was unable to lift the concrete slab under which many people were feared trapped, including passengers in a minibus.
Home Minister Rajnath Singh tweeted his concern and announced that rescue teams would be rushed to the scene.

Yet there was little sign of a coordinated rescue operation, with access for heavy lifting equipment restricted by the buildings on either side of the flyover and heavy traffic in the area.

The 2-km (1.2-mile) flyover has been under construction since 2009 and has missed several deadlines for completion.

Construction projects in India have long been plagued by lax safety standards and dubious ties between politicians and business.

The disaster could play a role in the West Bengal state election, one of five being held from next month that will give a verdict on Prime Minister Narendra Modi's nearly two years in power.

Indian company IVRCL is building the Vivekananda Road flyover, according to its web site. Its shares were down 6 percent after falling as much as 11.8 percent on news of the disaster.