Central American migrants from Mexico 'caravan' camp out on US border 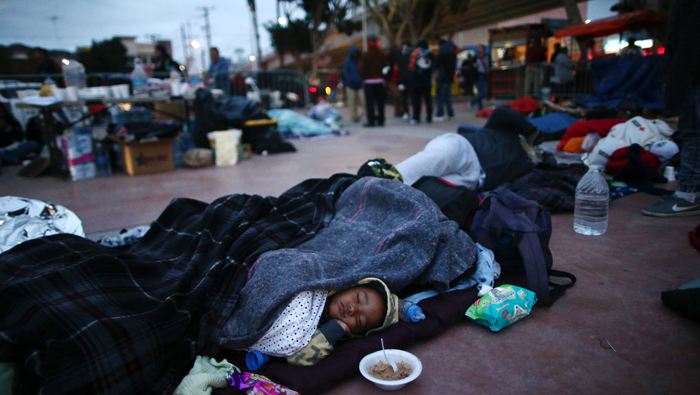 Tijuana(Mexico): About 150 Central Americans from a "caravan" of migrants in Mexico were camped out early on Monday at the US border, some trapped inside a port of entry between the two countries, as officials barred them from stepping foot onUS soil.
Denied passage on Sunday into a pedestrian crossing between Tijuana and San Diego at the San Ysidro port of entry, many of those who had fled El Salvador, Guatemala and Honduras hoping for US asylum slept in a square at the Mexican entrance.
Mexican officials late on Sunday allowed a first group into the walkway, about 50 women and children among the "most vulnerable" of the caravan, organizers said.
But they were stopped between the Mexican and US gates, where US Customs and Border agents would need to ask if they feared going back to their homelands, initiating a lengthy and fraught legal process that could end in deportation or asylum.
Organizers invited women and children in the group to return to migrant shelters, but few took up the offer, partly to show their determination and partly because they did not want to forfeit their best chance yet at reaching the United States.
"I think I'm next on the list to go," said Johanna Magaly, 37, from a patch of the square she had staked out with bags and clothes. The Guatemalan cook said she had fled a violent partner who attacked their eight-month-old son. "Especially for him," she said, shuddering as she glanced at the infant in her arms and tightened a thick blanket around him to ward off the cold.
The standoff between US officials and the bedraggled and exhausted migrants who had trekked 2,000 miles (3,200 km) together across Mexico was the culmination of weeks of uncertainty after US President Donald Trump began lashing out at them in early April.
"We have to have borders. If we don't have borders, we won't have a country," Trump said in a joint news conference on Monday with Nigerian President Muhammadu Buhari when asked about the caravan.
Organizers said that the San Ysidro port of entry, among the largest in southern California, could hold more than 300 detained migrants.
But the US Customs and Border Patrol has said that it was already at capacity. In early April, the caravan comprised 1,500 migrants from Honduras, Guatemala and El Salvador.
Trump complained about the caravan, ordering immigration officials to be zealous in enforcing rules to stop unlawful entry by its members. US Secretary of Homeland Security Kirstjen Nielsen said last week the caravan migrants should seek asylum in Mexico.
US border authorities say some people associated with the caravan had already been caught trying to slip through the border fence and encouraged the rest to report to authorities.