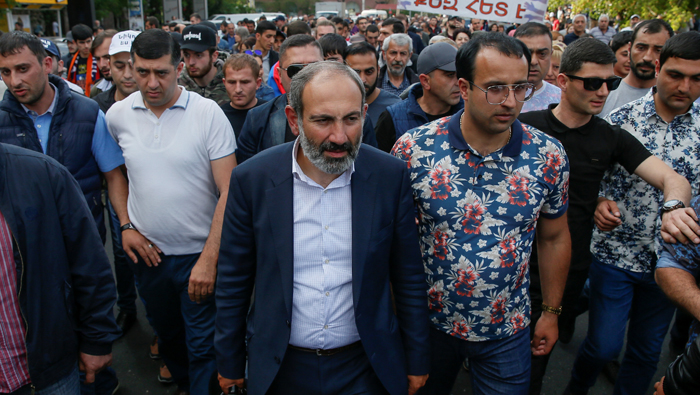 Yerevan: Armenian opposition leader Nikol Pashinyan became the sole candidate for the post of interim prime minister on Monday after a key deadline passed without other candidates registering.
Whether or not he gets the job, left open by the resignation of long-time leader Serzh Sarksyan after two weeks of anti-government protests, depends on a parliamentary vote to be held on Tuesday.
Pashinyan has received the support of all opposition parties in parliament, who hold 47 seats in the 105-seat legislature, but he will require a majority to win.
Anti-government demonstrations, driven by public anger over perceived political cronyism and corruption in the South Caucasian former Soviet republic, led to Sarksyan's resignation a week ago.
At a meeting with the governing Republican party on Monday, as well as with the opposition bloc Way Out, Pashinyan said that a vote for him on Tuesday would be a vote for an end to the crisis.
"I think this is a unique and great opportunity to resolve the domestic political crisis and to register the victory of the people, the kind of victory in which there are no losers," Pashinyan, a former journalist turned lawmaker, said.
After a break during the day, protests restarted in Yerevan towards the evening, with a column of demonstrators marching to the capital city's main square.
Speaking with journalists on Monday, Pashinyan said his main project as interim prime minister would be to organise new free and fair parliamentary elections for the post of prime minister.
Although demonstrations have been peaceful, the upheaval has threatened to destabilise Armenia, an ally of Russia, in a volatile region riven by Armenia's decades-long, low-level conflict with neighbouring Azerbaijan.