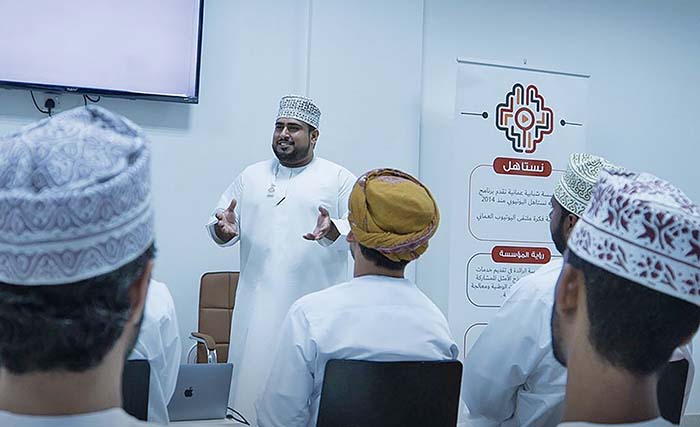 A group of talented Omanis gathered to form an online-savvy team that’s dedicated to raising awareness on societal issues through a discussion on their YouTube channel.
Wallah Nistahl, which simply means “We Deserve” in English, is an organisation and a youth-targeted online programme that broadcasts on YouTube with an aim to address and shed light on common issues in hopes to come up with a viable solution from the point of view of young Omanis.
Qais Salim Al Muqurshi, who is one of the 20 members of Wallah Nistahl, explained the show’s name saying, “The youth of this country are creative and deserve more, they deserve attention, involvement and for someone to listen to their ideas”.
The show began as a student effort made by SQU students who decided to start a visual platform to discuss student issues such as housing, allowances, transportation, student councils, and student groups. Today, it shifted its focus to serve the entire community. “The aim is not only to address issues, but to seek ways to solve them,” said Al Muqurshi.
**media[866217]**
What sets this one apart from other YouTube shows is that it tackles sensitive topics that are relatable to the young Omani. The programme also highlights important subjects that are well-researched, scientifically and statistically, which gets the viewer hooked and eager for the follow-up episode. The team behind the show also focuses on encouraging young folks to create informative video content, as it is a proven way to successfully influence and be influenced.
Apart from generating YouTube videos, the team holds relevant workshops, discussions and forums for young people in Oman, and has future plans to hold more workshops on YouTube video production for content creators.
The team has won several awards for their initiative, including the Youth Award for Youth Initiatives in 2014, Initiators Award for best youth initiatives in Oman in 2015, and the Award for Voluntary Youth Initiatives in the Arab World in 2017, among others.
Omani YouTube Forum
**media[866218]**
The team launched an exciting forum targeting content creators in Oman, titled the Omani YouTube Forum, which is a training forum that brings together all those interested and passionate to work under one umbrella for two consecutive days. During these days, Vloggers create and experiment with YouTube content, as well as present and share success stories of national and regional video bloggers.
In addition to providing specialised workshops in the field of content creating and marketing, the forum also includes a number of panel discussions among participants, where a select group of expert guests and social media influencers share their knowledge on the ever-evolving platform.
[email protected]