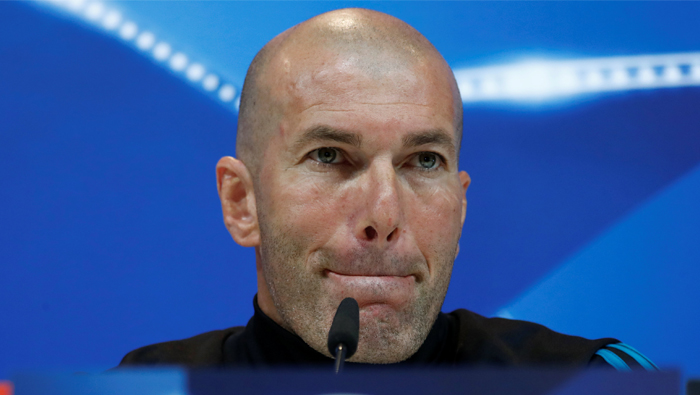 Madrid: Real Madrid coach Zinedine Zidane has said his side will look to attack Bayern Munich quickly in Tuesday's Champions League semi-final second leg as they seek to remain on course for an unprecedented third consecutive European Cup.
Real hold a 2-1 lead after the first leg in Germany last week, however the Frenchman insists the job is nowhere near complete.
"The key for us is think about winning the game and go onto the pitch wanting to do that. We need to go out to score quickly and that's what we'll try to do," Zidane told a news conference.
"It's a semi-final, we know how important it is and what we have to do. We don't have to change what we're doing.
"Our focus and determination will be there - we don't need to change much - what we did in the first leg was good, but we now need to show in the return that what we want is to go through."
With regular right back Dani Carvajal missing with a hamstring problem, Zidane faces a selection headache given replacement Nacho has sat out the past month with a thigh injury.
Local media reports indicate winger Lucas Vazquez could be asked to deputise, however no decision will be made until Tuesday.
Midfielder Isco is also a doubt following a shoulder problem.
"Nacho has been out, but trained a lot recently, and today he was with us and he's ready to go in that respect," Zidane said.
"We have time ahead of the game and we'll think about what we're going to do."
Real captain Sergio Ramos echoed the coach's thoughts: "We got a good result over there, but we need to think that it's still 0-0. We want to defend our title, and beat the Germans, too," he said.
"We're making the impossible look easy. In the last four years we've won three Champions League titles. In such a small amount of time it's a challenge for the squad to carry on breaking records."
Ramos, meanwhile, also said that his side would not give Barcelona a guard of honour in their league meeting next weekend despite the Catalan outfit securing the La Liga title on Sunday, as per the coach's instructions.
"What Zidane says is gospel. We're making too much fuss out of all this. Barca have the title, which is what they wanted, but there will be no guard of honour - full stop," he said.
"They want to enjoy their title and the same for us and ours, we need to eliminate the Germans and to reach another final."