NBA puts gamers in spotlight as esports league tips off 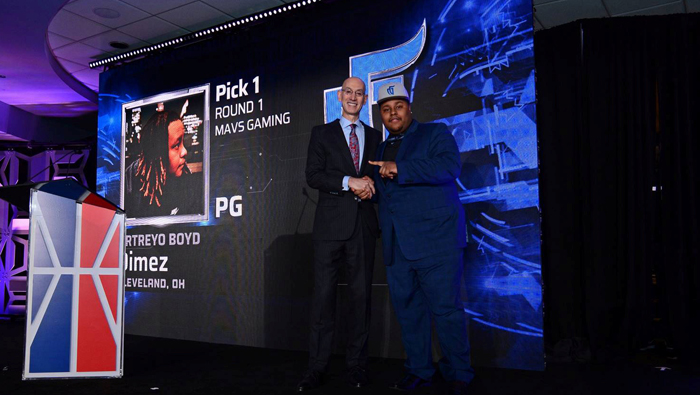 New York: Artreyo Boyd may not have a fierce crossover dribble or be able to soar through the air like NBA players but that has not kept him from becoming a top-drafted basketball professional like LeBron James without leaving the comforts of his couch.
Boyd, a round-faced and dreadlocked 23-year-old from Cleveland, is the face of the NBA 2K League, which will pit the world's best players in the popular NBA 2K video game against each other when the inaugural season begins on Tuesday.
The NBA is the first US professional sports league to run an esports league and it has attracted gamers from all walks of life, among them a former financial advisor who played football in college and a former collegiate basketball player.
For Boyd, better known by his player name 'Dimez', the NBA's push into esports offered a timely dose of clarity to his long-term plans since he had no day job and routinely spends more than 12 hours a day playing NBA 2K.
"When they announced it I was like 'oh man, they are finally doing this.' Now I have something that I can do. I can make a career out of this, I have a path, a vision."
Boyd told Reuters in a telephone interview.
"This has been my full-time job since high school. This has been it."
More than 70,000 hopefuls tried out for the league but after two qualifying stages and an interview process only 102 players were eligible to be drafted by the league's 17 teams, all of which are backed by NBA franchises. Boyd, whose avatar is a 6-foot-5 (1.99m) point guard that weighs 215 pounds (97.5 kg), was drafted first overall by the Dallas Mavericks' Mavs Gaming four weeks ago at New York's Madison Square Garden in an event that mirrored an NBA Draft.
The teams are comprised of six gamers -- one for each of the five traditional basketball positions plus a substitute -- who will compete in a 17-week season that will be streamed on Amazon's streaming platform Twitch. Competitors, who are subject to a drug-testing policy, do not control actual NBA players but rather avatars of themselves they have created.
Players will live for free in their team's region during the season and will be flown to a studio each week to compete where they vie for $1 million in prize money across three tournaments and playoffs, with $300,000 going to the NBA 2K League champion.
The NBA has already referred to the 2K League as the fourth league in its family alongside the NBA, WNBA and G League and called the competitors "athletes" given the mix of physical and mental skills needed to excel.
There are no women in the league nor was there a way to determine how many even tried to qualify as each individual was only identifiable by their gamer tag.
NBA 2K League Managing Director Brendan Donohue did say one woman was among the 250 people who reached the interview process and that the league is looking into whether there are barriers that kept female players from making it into the league.
"We were disappointed in that honestly," Donohue said when asked about the lack of female presence in the 2K League.
"We're going to work to ideally change that in the future."
Brandon Raudenbush, who was drafted in the fourth round by the Cleveland Cavaliers' Cavs Legion GC, played basketball for St. Thomas University in Miami where he continued to cling to slim hopes of one day competing on NBA hardcourts.
"The more you get older you start to realize that I don't jump as high and I don't run as fast as some of these guys in the NBA," said Raudenbush, 26.
"But it's kind of funny how it all worked out. I always wanted to be in the NBA but I never saw myself getting into the NBA the way I am in it now."
Alexander Bernstein, 24, took a more non-traditional route to the 2K League as he played college football in South Dakota where he earned a sociology major before taking a job in Beverly Hills as a financial advisor.
"I was great at the job but it wasn't something that I 100 per cent had my heart into," said Bernstein, who was drafted in the fourth round by Philadelphia's 76ers GC.
"And at the end of the day playing video games was something that I was very attracted to and it brought me joy."
Bernstein, who goes by the gamer tag 'Steez', is now eager to join his peers and help dismantle some of the commonly-held stereotypes about the world of esports.
"It's not really the cliche of sitting around and eating a bag of potato chips and playing games," said Bernstein.
"There is more to it and this is starting to explode and be a new world order that's taking over regular sports."