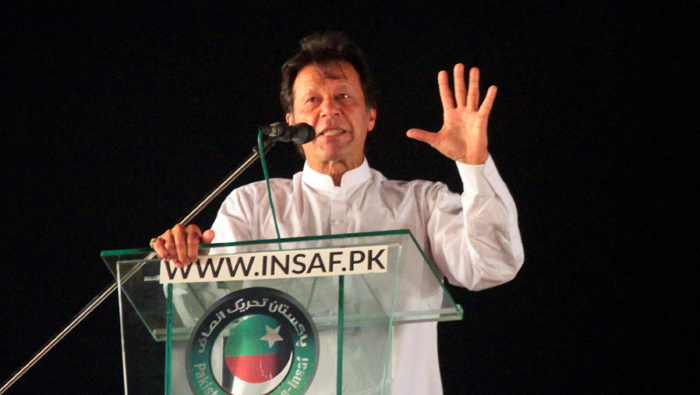 Lahore: Pakistani opposition figure Imran Khan on Sunday vowed to sweep to power in upcoming elections, promising radical change for the poor at a campaign kick-off rally in the city of Lahore that has long been the power base of ousted premier Nawaz Sharif.
With the red-brick minarets of Lahore's Mughal-era Badshahi mosque in sight, Khan outlined a populist 11-point plan to usher in a new era of prosperity that he envisages for Pakistan after the general election at which he hopes to become prime minister.
"Today we are at crossroads," said Khan, a former cricketing hero and founder of the Pakistan Tehreek-e-Insaf (PTI) party. "It is time to change our destiny and think big."
Khan told a boisterous crowd of about 100,000 people that Pakistan was "heading towards destruction" but his plan would help forge a fairer society and steer Pakistan towards a path first envisaged by the nation's father, Muhammad Ali Jinnah.
Khan said that if elected he would build schools and "world class hospitals" across the country, while farmers would get cheap loans. He also pledged to build 5 million homes for the poor, which would create jobs and stimulate the economy.
After spending much of his post-cricket political career on the fringes, Khan has in recent years emerged as a key challenger to Sharif, a three-time prime minister who was ousted by the Supreme Court last year but whose party retains power.
Sharif's legal woes, which the veteran leader says are politically motivated, could further boost Khan in the run up to the elections as an anti-corruption court is due to soon deliver a verdict on another Sharif trial.
Khan has predicted Sharif will be jailed before the polls, likely in July. Khan, who has sought to shed his playboy image of the past, is betting that his anti-corruption message, coupled with anti-America rhetoric and a projecting image of pious devotion, will propel him into power in the nation of 208 million people.
In Lahore, Khan's message resonated with many of the bandana-wearing young men waving PTI's green and red-colour flags. "Imran Khan has given us the slogan of 'New Pakistan' and that's what we want," said Shahzad Khan, 17, in reference to the "Naya Pakistan" slogan used by PTI.
Sharif has accused Khan of being a puppet of the powerful military establishment that has a history of meddling in Pakistani politics. Khan denies colluding with the army and the military denies interfering in modern-day politics.
To dislodge Sharif's Pakistan Muslim League-Nawaz (PML-N) party, Khan's PTI will have to make inroads into Pakistan's biggest province, which is home to 110 million people and a well-oiled PML-N electoral machine built over several decades.
Sharif was the chief minister of Punjab in the 1980s and his younger brother Shahbaz has ruled the province since 2008, entrenching PML-N's support across the wealthiest of Pakistan's four provinces.
"We feel they are weakening with every day," Khan told foreign journalist ahead of the rally. He added that unlike in 2013, when PML-N swept to power, this time around many of the so-called "electables" - politicians who carry large rural vote banks due to their status as tribal elders, feudal lords and heads of various clans - will switch allegiances away from PML-N to PTI.
"The electables...weigh things up, they want to be on the winning side," Khan told foreign media. But at the Lahore rally, Khan shunned talk of electables and focused on promising a new dawn for Pakistan's poor. "This system cannot run unless we stand up with the downtrodden," he said. "I am standing with you, it is time of make new Pakistan."