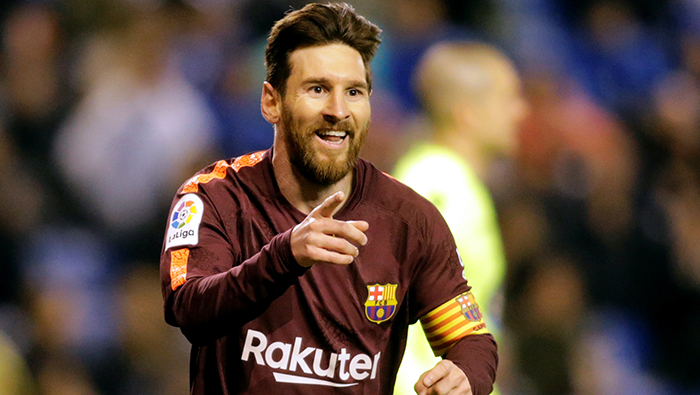 Coruna, Spain: Lionel Messi scored a hat-trick as Barcelona clinched a 25th Liga title on Sunday after winning 4-2 at Deportivo La Coruna despite throwing away a two-goal lead in a thrilling game which also confirmed Depor's relegation.
Barca only needed a draw to seal the title and they made a perfect start when record signing Philippe Coutinho scored with a stylish chipped shot in the seventh minute while Messi doubled their lead in the 38th by volleying home an outrageous cross by Luis Suarez.
Deportivo had been unlucky to go two goals down and they deservedly pulled one back through Lucas Perez five minutes before halftime before Turkish midfielder Emre Colak equalised in the 68th.
Clarence Seedorf's side needed victory to survive in the top flight for another week and they came close to finding a third goal and becoming the first team to beat Barca in the league this season.
But the runaway leaders kept coming back at them on the counter-attack and it was top scorer and talisman Messi who restored their lead, striking from close range in the 82nd minute after being teed up by Suarez.
Messi claimed his 32nd league goal of the season with the help of another pass from Suarez to round off the victory and give Barca a seventh Liga title in 10 years, completing a fourth domestic double in that same period after beating Sevilla 5-0 in the King's Cup final last week.
"When you have been chasing the title for so long you feel a lot of happiness at winning it at last but as well as that we feel satisfied," Barca coach Ernesto Valverde told reporters.
"The season is very long, it starts in August and here we are after everything that has happened. The title is not decided by a couple of games but by many, we have been chasing it since the start and we have been top of the table since the start.
"We have won it with a very big margin and in the end we were the best in the league."
Valverde's unbeaten side have 86 points after 34 games, second-placed Atletico have 75 from 35 and third-placed Real Madrid 71 from 35. Deportivo are 18th on 28th, 12 points adrift of 17th-placed Levante with three games left.
While Deportivo's players and supporters mourned their return to Spain's second tier for the first time since 2014, Barcelona's squad formed a human chain and danced around the centre circle.
"This double tastes glorious," midfielder Sergio Busquets said.
"Winning seven league titles out of the last 10 is outrageous and just look at how we did it this year, with four games remaining. We have had an almost perfect Liga campaign," Busquets added.
"We haven't lost all season and we have won the league by having a very good start, which gave us a lot of confidence and then after beating Atletico Madrid (in March) we continued to perform at a very high level."