Oman economy poised to consolidate the gains of 2017 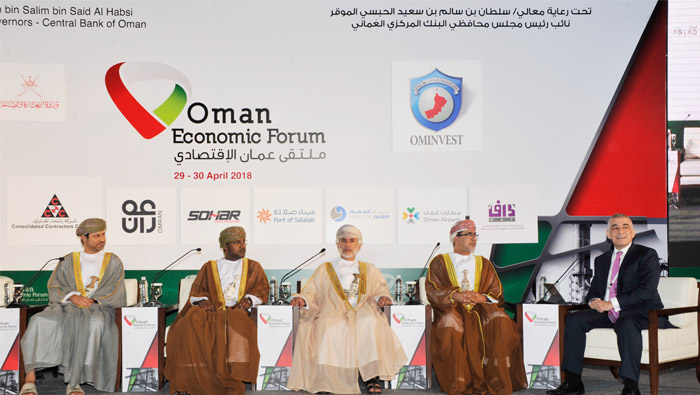 Muscat: The sixth edition of Oman Economic Forum was opened on Sunday at Oman Convention and Exhibition Centre under the auspices of Sultan bin Salim Al Habsi, Deputy Chairman of the Board of Governors of the Central Bank of Oman (CBO).
The two-day forum is organised by the Ministry of Commerce and Industry and Al Iktissad Wal Aamal.
“The Sultanate’s GDP at the current prices has posted positive growth to increase by 8 per cent in 2017, thanks to the oil activities which grew by 20.8 per cent and the non-oil activities which grew by 3 per cent, said Al Habsi while delivering the keynote speech.
“The International Monetary Fund (IMF) forecasts an 11 per cent growth in the Sultanate’s GDP at the current prices in 2018, he added. Al Habsi stressed that the government continued its balanced financial control policy coupled with remarkable growth of oil revenues which led to decrease of the state budget deficit to about OMR3.7 billion in 2017 compared to OMR5.3 billion in 2016.
He noted that the Central Bank of Oman has continued its role in the national economy by maintaining the financial and monetary balance. The Bank has ensured smooth running of the banking and financial institutions and maintained the value of the local currency in the local and foreign markets.
On his part, Dr. Ali bin Masoud Al Sunaidy, Minister of Commerce and Industry said that the Forum comes within the positive change witnessed by the Omani economy since 2017 through the economic diversification projects and completing the infrastructure projects, such as Muscat International Airport, Al Batinah Expressway which will be completed soon and Oman Conventions and Exhibitions Centre, of which a large portion has been opened with the rest to be opened at the end of this year.
“The Forum focuses on sustainability at the coming period and how to ensure growth of the industrial estates, ports and airports without reliance on government funding i.e. through local and foreign borrowing, he added.
“With the recovery of oil prices, it will be easy for the government to pay the loans it obtained in 2016 and 2017 to avoid delay in the implementation of the development programmes and to enhance the growth of national economy, he further said.
Khalid bin Mohammed Al Zubair, Chairman of Oman International Development and Investment Company delivered the opening speech of the Forum where he pointed out that the Sultanate, as well as other GCC States, has recovered from the sharp recession in 2016 to post remarkable recovery in 2018.
He pointed out that the Omani economy is expected to grew by 3 per cent during this year, coupled with remarkable recovery in oil prices and continuing financial reforms and diversification efforts which started fruiting.
He also said that the current account deficit has frozen at 18.8 per cent in 2016 with the growth of the value of non-oil exports. This may reduce the current account deficit from 3 to 4 per cent of the GDP by the end of 2018.
“The National Economic Diversification Programme ‘Tanfeedh’ pumps about $45 billion in the key non-hydrocarbon sectors.
The first day included a number of sessions the first of which on Oman’s Economy in Light of the Global Economic Recovery covered adaptation to global economic developments & uncertainty, new challenges; new policies, transformation from a consumer based to a production based economy and private sector’s adaptation to the new challenges and policies.
The second session on Strategic Importance of Ports in Developing a Sustainable Economy covered Oman as a logistics hub in the MENA, challenges and opportunities in a highly competitive environment, the ongoing basic infrastructure projects & expansion plans, and expanding trade & shipping lines to Oman’s ports.
The third session on "Duqm: A Comprehensive Logistics & Industrial Hub" covered accomplished & ongoing projects, future outlook and opportunities, and Duqm Refinery.
Yahya bin Said Al Jabri, Chairman of the Special Economic Zone Authority (SEZAD) delivered a speech where he pointed out that the zone witnesses a second wave of investments by the Omani and foreign private sector.
He pointed out that Duqm seeks, throughout the coming two decades, to become a regional hub for energy by leveraging from its strategic location; midway between the crude oil production areas and the consumer markets for oil in the Asian countries overlooking the Indian Ocean.
The fourth session on Tapping into Public Private Partnership for Economic Development covered Potential business & Investment Opportunities for the private sector, Health, Tourism and Real Estate.
The opening ceremony was attended by a number of their highness, excellences, honourable members of the State Council, local and foreign investors.