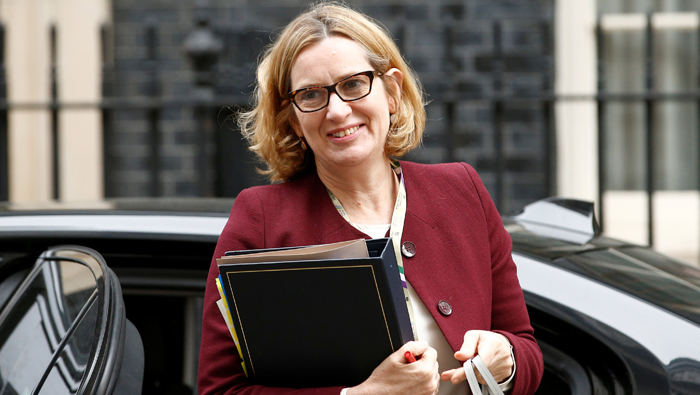 London: Britain's interior minister Amber Rudd was under growing pressure on Sunday after a challenge to her testimony on the deportation of immigrants prompted fresh calls for her resignation.
The Guardian newspaper reported a letter from Rudd to Prime Minister Theresa May last year in which she stated an "ambitious but deliverable" aim for an increase in the enforced deportation of immigrants.
Earlier, her former deputy said he discussed with her attempts to increase the number of government deportations, but he said the increase was an ambition rather than a target.
The controversy surrounding one of May's closest allies coincides with Britain entering crucial negotiations on a future trade deal with the European Union and amid rising domestic tension over Brexit policy.
For the last two weeks, British ministers have struggled to explain why some descendants of the so-called "Windrush generation", invited to Britain from Caribbean nations to plug labour shortfalls between 1948 and 1971, are being denied basic rights because of trouble documenting their status.
The scandal overshadowed the Commonwealth summit in London earlier this month and has raised questions about May's six-year stint as interior minister before she became prime minister in the wake of the 2016 Brexit referendum.
The government has apologised for the fiasco, promised citizenship and compensation to those affected, including to people who have lost their jobs, been threatened with deportation and denied benefits because of the errors.
But more than 200 mainly opposition members of parliament have written to the prime minister calling for the pledges to be written into law "without delay". The letter accuses the Rudd of making up policy "on the hoof" to defuse the situation.
Rudd is due to make a statement to parliament on Monday after giving contradictory statements about whether the government has immigration removal targets. The pressure on Rudd to stand down increased after she said the government didn't have targets for deporting people - only for a memo to emerge mentioning specific targets for enforced removals.
Rudd was facing new questions about whether she misled parliament after her former deputy said on Sunday he discussed with her a plan to increase deportations by 10 per cent.
Brandon Lewis, now the Conservative Party chairman, told the BBC in an interview that targets were "very different" from an aim to increase the number of removals referred to in the memo.
Labour accused him of "hiding behind semantics" in an effort to save Rudd's career. "He let the truth slip and sealed her fate. Amber Rudd knew of the targets she pretended didn't exist," the shadow interior minister Diane Abbott said. "It's time for Rudd to go."
In a separate letter, Abbott has called for a full inquiry into whether the interior minister misled parliament and breached the ministerial code. Abbott said Rudd's explanations as to why she had told members of parliament there were no such targets, when in fact there were, "stretch credulity to the limit". But May's office said there is no need for an investigation because ministerial code only requires a resignation if a minister knowingly misleads parliament - a charge the interior minister denies.