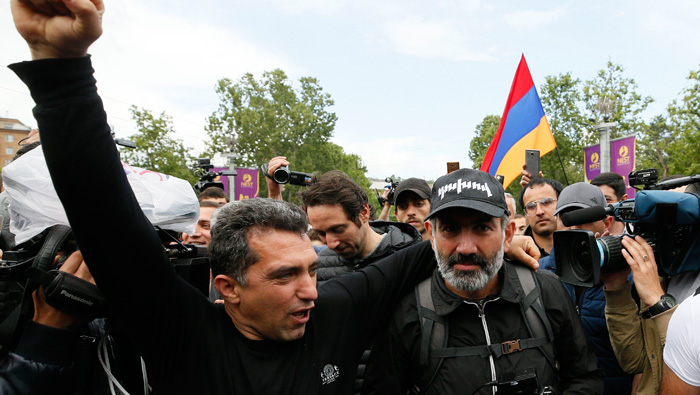 Yerevan: Armenia's ruling party said on Sunday it would not stop protest leader Nikol Pashinyan becoming interim prime minister if all opposition factions in parliament support his candidacy.
More than two weeks of anti-government protests forced the resignation of Republican Party veteran Serzh Sarksyan as prime minister and the party has said it will not put forward one of its own members to replace him, in a bid to calm tensions.
Pashinyan, a former journalist turned lawmaker, has said parliament must elect him prime minister on May 1. He is so far the only person to put himself forward and, as of Sunday, had received the support of all opposition parties in parliament that hold 47 seats of the 105-seat legislature where the Republicans have a majority.
After talks with Pashinyan on Sunday, the parliamentary leader of the Republican Party, Vahram Baghdasaryan, said the party would not "impede the election of the people's candidate" if all three opposition factions in parliament supported him.
The announcement coincided with the resumption of protests in the capital Yerevan after a two-day moratorium during which demonstrations against the Republican Party and official corruption were held in smaller cities.
Although demonstrations have been peaceful, the upheaval has threatened to destabilize Armenia, a close ally of Russia in a volatile region riven by a decades-long, low-level conflict with neighbouring Azerbaijan.