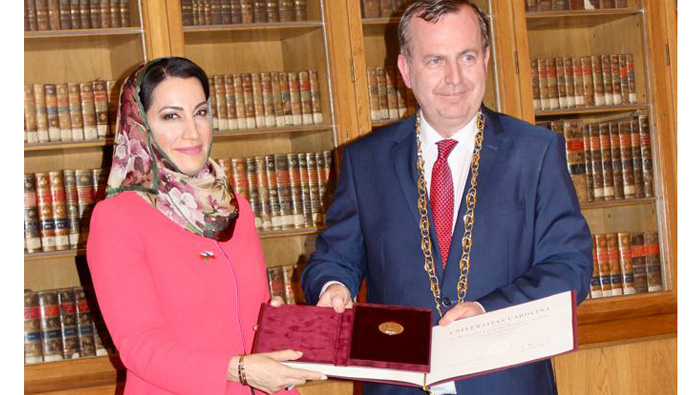 MUSCAT: Her Highness Sayyedah Dr. Mona bint Fahd Al Said, Assistant Vice Chancellor for International Cooperation at Sultan Qaboos University (SQU), received a gold medal from Charles University at Czech Republic, in recognition of the strong ties between Charles University and SQU and the efforts of Dr. Mona to establish and sustain cooperation.
The award is in recognition of the longstanding ties between SQU and Charles University over the years. Sayyedah Dr. Mona Al Said received the medal by Rector Tomas Zima at the Carolinum Hall of Charles University in the presence of distinguished academics and scientists.
Sayyedah Dr. Mona Al Said expressed her appreciation for the recognition given to her for her significant efforts in international cooperation around the world.
She gave a speech highlighting the most important achievements of SQU in the past decades in the international arena in all fields. During the speech, she spoke about the Sultanate’s pioneering role in building bridges of cooperation between people through cultural and scientific cooperation. She also highlighted the Sultanate’s respect for all people of the world and the wise policy it pursues under the leadership of His Majesty Sultan Qaboos bin Said.