Assad says he can form new Syria government with opposition 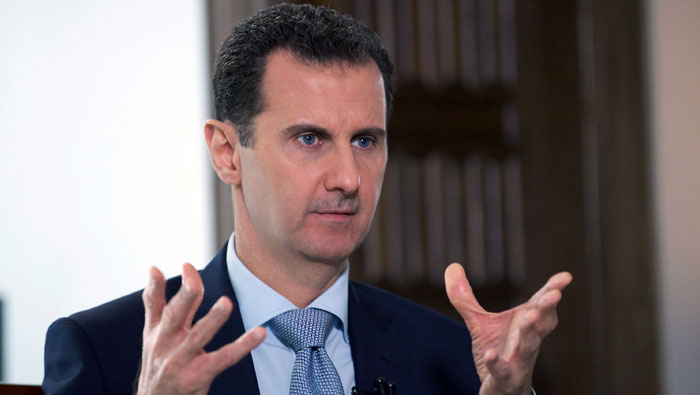 Moscow/Beirut: Syrian President Bashar Al Assad said it would not be difficult to agree a new Syrian government including opposition figures, but his opponents responded on Wednesday that no administration would be legitimate while he remained in office.
Assad, bolstered by military victory in the desert city of Palmyra, was quoted by Russia's RIA news agency as saying a new draft constitution could be ready in weeks and a government that included opposition, independents and loyalists could be agreed.
While the distribution of portfolios and other technical issues would need to be discussed at Geneva peace talks, which resume next month, "these are not difficult questions", Assad said.
Opposition negotiators immediately dismissed Assad's remarks, saying that a political settlement could only be reached by establishing a transitional body with full powers, not a government under Assad.
"The government, whether it's new or old, as long as it is in the presence of Bashar Al Assad, is not part of the political process," said George Sabra of the High Negotiations Committee. "What Bashar Al Assad is talking about has no relation to the political process."
Syria's crisis erupted five years ago with protests against Assad which were put down with force. It descended into a civil war which has killed more than 250,000, drawn in global military powers and helped IS establish its self-declared caliphate. Nearly 5 million refugees have been driven abroad.
Assad told RIA the war had cost more than $200 billion in economic losses and damage to infrastructure. That is in line with a UN-backed body which estimates physical damage at $90 billion, with an additional $169 billion of accumulated losses from a collapse in GDP to less than half the 2011 level.
Russia's six-month-old intervention in Syria helped swing military momentum in Assad's favour, reversing last summer's gains by insurgents including Western-backed rebels and helping government forces drive IS out of Palmyra on Sunday.
The recapture of the Palmyra and its military airport, in the central Syrian desert, opens up the road further east to the IS bastions of Deir Al Zor province and Raqqa.
"After liberating Palmyra it is necessary to move into the nearby regions which lead to the eastern parts of the country, for example, Deir Al Zor," Assad said.
"At same time, we need to start in the direction of Raqqa, which is currently the main IS stronghold."
Any offensive on Deir Al Zor or Raqqa however would likely need significantly more firepower than the Palmyra assault.
"It's an open question whether or not the Syrian army is going to be able to push any further to the east," said US Army Col Steve Warren, Baghdad-based spokesman for the US-led coalition against IS.
"They are stretched fairly thin and they still have a significant number of forces tied up in Palmyra," he said.
Although the United States and Russia worked together to establish a limited UN-backed truce in Syria, which excludes IS and Al Qaeda's Nusra Front, US military officials have said they are not cooperating with Russian or Syrian forces.
The Russian-backed Syrian ground forces are concentrated in western parts of the country, confronting IS on its western front. US-backed efforts in Syria, including Washington's support for a joint Kurdish-Arab force against the militant group, are focused instead on its northeastern flank.
However Interfax news agency quoted Russian Deputy Foreign Minister Oleg Syromolotov as saying Moscow and Washington were discussing "concrete" military coordination to recapture Raqqa from IS.
In a message to the UN's Ban, Assad said Syria was ready to cooperate with "all sincere efforts" to combat terrorism, state news agency SANA said.
"This moment might be the most appropriate to accelerate the collective war against terrorism," it quoted him as saying.
Since capturing Palmyra, Syrian government forces and their allies have been targeted two towns to the east and west of the city, seeking to eliminate IS from an expanse of desert in the centre of the country.
Backed by Russian air power they virtually surrounded the town of Al Qaryatain, state media have reported. Heavy air strikes have also struck near the town of Sukhna, where IS fighters retreated to when they pulled out of Palmyra.
Russian and Syrian officials say the retreating militants left mines and explosives among the 2,000-year-old ruins which they abandoned in Palmyra, and Assad appealed to the United Nations to help restore the city's ancient monuments.
IS militants dynamited two Roman temples, a triumphal arch and funeral towers last year, and also smashed statues and displays at the city museum before they fled.
Russia said earlier it was sending military engineers, sniffer dogs and "demining robots" to help defuse explosives in the old city.