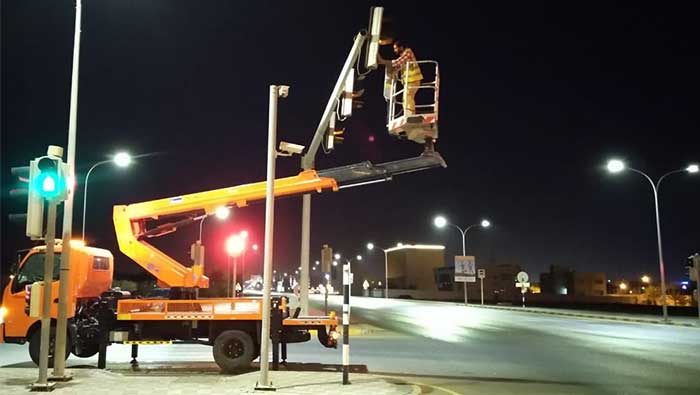 Muscat: Municipal authorities in the Sultanate’s capital have installed green traffic light sensors that helped to reduce waiting times for drivers by 50 per cent.
“The Light Signal Department has begun testing the system at intersections along 18th November Street,” an official at Muscat Municipality said, “This system operates on a green waves system that allows continuous traffic flows across several intersections in one main direction.”
Signals are coordinated between traffic lights, according to sensor data from current traffic. When a signal turns green at an intersection, it sends the next intersection a remote signal, which illuminates the green signal there, as well. The traffic light will turn red, once it receives a signal about the presence of vehicles at the next intersection.
According to the municipality, the results of the 18th November Street sensors indicate that the density of stopped cars waiting at intersections was reduced by 50 per cent, compared to before the sensors were installed, in addition to increasing the flow of traffic and reducing fuel consumption.
“Work continues to cover all intersections of Muscat Governorate,” the official added.
Maintenance and upkeep
Since the beginning of the year, Muscat Municipality has been working on the maintenance and upkeep of Muscat streets. In the first six months of the year, 5 teams were allocated for the morning period, two for the evening and another team to work after midnight to maintain street lighting columns on main roads.
Concrete bases
In 2018, the Department of Lighting at the Directorate General of the Municipality of Muscat repaired a number of ground wires, replacing concrete bases and columns damaged in traffic accidents.
A total of 1,859 m of wire was distributed across all the wilayats of Muscat, as well 25 signal poles being replaced.
The Directorate General of Projects also replaced 1,045 light columns with LED lighting systems along 18th of November Street in Al Azaiba.
The energy-saving lighting system has been installed on 84 lighting poles along the coast of Al Qurum beach, along a length of 1,800 metres.