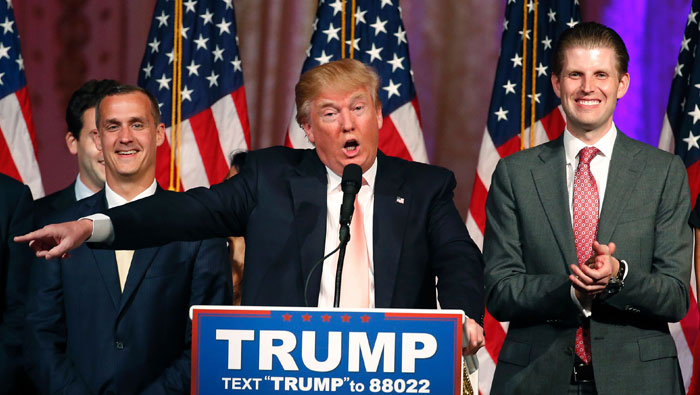 Washington: US Republican presidential candidate Donald Trump vowed on Wednesday to stand by his campaign manager despite the aide's arrest over a misdemeanor battery charge, drawing criticism from rivals.
Trump, in a round of television interviews, played down the incident involving a reporter and campaign manager Corey Lewandowski, 42, who was arrested in Florida on Tuesday.
Trump also stood by comments he made Tuesday night that he was abandoning his pledge to support whoever eventually wins the nomination to be the party's presidential candidate for the November 8 election.
Police in Jupiter, Florida, charged Lewandowski with intentionally grabbing and bruising the arm of Michelle Fields, then a reporter for the conservative news outlet Breitbart, when she tried to question Trump at a campaign event on March 8.
Trump and Lewandowski had both initially denied the incident occurred.
Trump, a New York real estate magnate, is front-runner to be the Republican nominee after running an insurgent campaign that has alarmed many in the party establishment. Opponents have criticized not just his proposals on issues such as trade and immigration but his streams of insults toward rivals and the aggressive tone of his rallies.
On Wednesday, Trump defended Lewandowski and went further to allege that the reporter had grabbed Trump. He said he was considering legal action in response.
"I'm sure there will be a counter-claim coming down the line," he told ABC News.
"She made up this story," Trump added on NBC. He told Fox News that Lewandowski had likely grabbed the reporter "unknowingly."
Fields has stood by her account. "Seriously, just stop lying," she said in response to a Twitter post by Trump following the arrest.
Trump leads his opponents, US Senator Ted Cruz and Ohio Governor John Kasich, in the race for 1,237 delegates needed to secure the nomination at this summer's Republican Party convention.
Cruz told CNN on Tuesday that "of course" he would fire Lewandowski over the battery charge. "It shouldn't be complicated that members of the campaign staff should not be physically assaulting the press," Cruz said.
If Trump does not win the delegates needed before July, the party will need to turn to a complicated and likely contentious process to formally select a nominee at the convention.
Kasich also wavered on Tuesday on his pledge to back the eventual Republican nominee.
"If the nominee is somebody that I think is really hurting the country... I can't stand behind them," Kasich told CNN.
Former candidate Marco Rubio has asked party leaders in 21 states and territories not to release the 172 delegates he won before he quit, media outlets reported.
Rubio "wants to give voters a chance to stop Trump," his aide Alex Burgos told NBC.
Four appointees of the party's convention rules committee told Politico on Wednesday they are willing to change a 2012 rule requiring candidates to win a majority in at least eight states to be eligible for the nomination.
Only Trump has met that threshold so far.