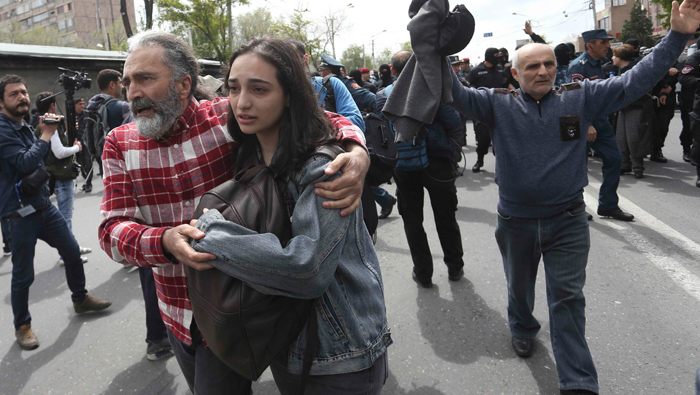 Yerevan: Armenian police detained three opposition leaders on Sunday and dispersed some protesters on the 10th day of demonstrations against the appointment of former president Serzh Sarksyan as prime minister, an opposition politician and witnesses said.
Protesters accuse Sarksyan of clinging to power after he was appointed premier this month following 10 years as president.
Tens of thousands of opponents have marched through Yerevan, blocking streets in the city centre and staging sit-ins.
Police said in a statement that opposition politician Nikol Pashinyan and two other lawmakers had been "forcibly removed" from the protest but had not been arrested.
It also said it had started to disperse protesters "guided by the law."
The statement was issued shortly after Pashinyan held talks with Sarksyan, who walked out of the meeting after accusing his opponents of trying to "blackmail" the authorities.
One of the protest leaders, Ararat Mirzoyan, wrote on his Facebook page that he had been "illegally detained" along with Pashinyan and a third opposition politician, as well as other protesters.
A Reuters witness said police armed with batons and shields cleared at least one area of the capital where protests had been taking place, but demonstrators remained in other areas.
At his brief meeting on Sunday with Pashinyan, Sarkysan had said: "This is not talks, not a dialogue, it's just an ultimatum, blackmail of the state, of the legitimate authorities."
He said his opponents "did not learn the lesson of March 1", referring to a protest rally after his re-election in 2008 when 10 people were killed in clashes with police.
Parliament voted on Tuesday to allow Sarksyan to become premier.
Under a revised constitution approved in a 2015 referendum, most state powers in the small, ex-Soviet state have shifted to the prime minister while the presidency has become a largely ceremonial post.
"No one has dared and will dare speak to us in the language of threats. I am telling you: you have no understanding of the situation in the country. The situation is different to the one you knew 15-20 days ago," Pashinyan had told Sarksyan on Sunday.
"The situation in Armenia has changed, you don't have the power of which you are told. In Armenia, the power has passed to the people," he said.