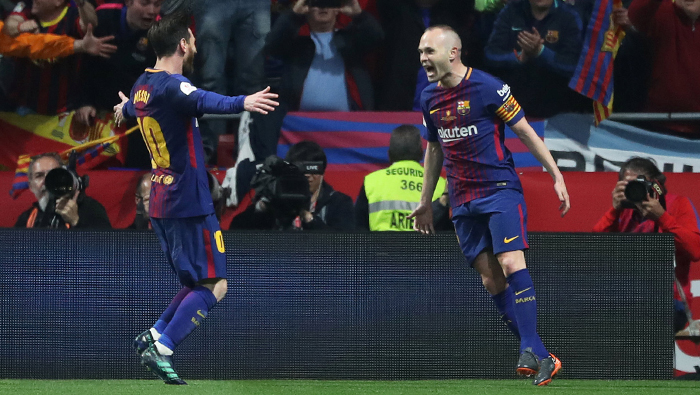 Madrid: Unstoppable duo Andres Iniesta and Lionel Messi helped Barcelona thrash Sevilla 5-0 to win the King's Cup final for the fourth consecutive season on Saturday as they close in on a likely domestic double.
Luis Suarez struck twice in the first half for the Catalans as they won the competition for a record 30th time. However, it was Iniesta and Messi who pulled all the strings as the La Liga leaders blew away Vincenzo Montella's stunned side.
Philippe Coutinho set up Suarez for the opening goal in the 14th minute and Barcelona dominated the rest of the game. The result goes some way to make up for their humiliating Champions League quarter-final elimination by AS Roma earlier in April.
Messi slammed home the second after good work from Jordi Alba with Suarez adding another, before Iniesta netted from a tight angle. Coutinho added a fifth from the penalty spot to complete the rout.
"This doesn't cover up what happened in Rome but it's an important title," said Suarez.
"At the start of the season we would have taken this, there's huge merit to it.
"It's strange to be knocked out of the Champions League, we gave the impression that we could go far in it."
Both Barcelona and Sevilla fans sang Iniesta's name when he was substituted in the final stages, with the chants echoing around the Wanda Metropolitano stadium until after the final whistle.
The veteran midfielder is considering a move to the Chinese Super League and this could be his last cup final for Barcelona - and he made sure it was one to remember.
"Barcelona had a formidable game and when they are like that it's hard to stop them," said Montella.
"They have formidable players like Iniesta, Messi, Suarez.
"I'm very sorry to the fans who were fantastic today. We are not in our best form, we have to react."
With Iniesta leading the way, Barca came flying out of the blocks and moved ahead after a long ball from goalkeeper Jasper Cillessen found Coutinho deep in opposition territory and he set up Suarez.
Sevilla rallied but after a couple of half-chances Barcelona doubled their lead when Iniesta sent Alba flying down the left. The Spaniard backheeled the ball into Messi's path and the Argentine fired in.
Messi then created the third for Suarez with a sublime through-ball and the fourth for Iniesta, whose goal will be a special moment to take with him if he does depart.
Coutinho's penalty after Clement Lenglet handled the ball in the area helped Ernesto Valverde's side finish emphatically and they were soon able to celebrate with the cup which had their name on it from the start - and recently always seems to.