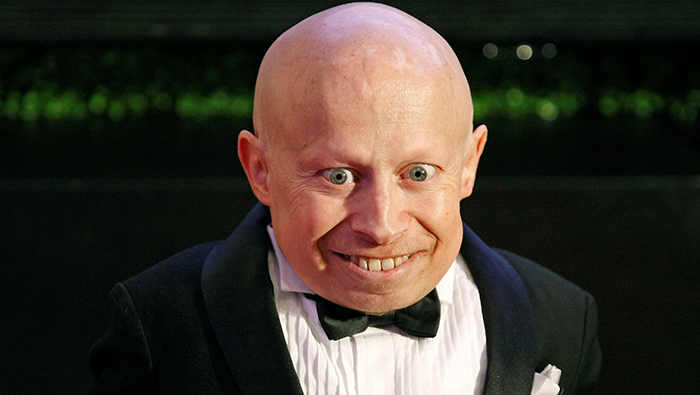 California: The diminutive actor who starred in the Austin Powers movies' as "Mini Me", Verne Troyer, died Saturday at a hospital in Los Angeles. He was 49.
"It is with great sadness and heavy hearts to write that Verne passed away today," his family posted on his Instagram account.
The cause of death was not announced, but the family wrote that "depression and suicide are very serious issues."
"You never know what kind of battle someone is going through inside. But be kind to one another. And always know, it's never too late to reach out to someone for help," they said.
Troyer, who was 2 feet 8 inches (81 cm) tall, is best known for Austin Powers movies "The Spy Who Shagged Me" and "Goldmember."
He also had the role of the goblin Griphook in the Harry Potter movies.
Troyer's height was due to achondroplasia dwarfism, Variety reported. He once said that his parents "never treated me any different than my other average-sized siblings. I used to have to carry wood, feed the cows and pigs and farm animals."
He was never trained as an actor, but while he was a telephone customer service worker, a friend told him that Hollywood producers were looking for someone to be a stunt double for a baby, Troyer told an entertainment news website, HollywoodChicago.com.
He had more than 25 other film credits to his name, including roles in "Fear and Loathing in Las Vegas," "The Love Guru," and "The Imaginarium of Doctor Parnassus."
A statement from his publicist on his Facebook account said he had gone through "a recent time of adversity."
His family also posted online that Verne was a "fighter when it came to his own battles. Over the years he's struggled and won, struggled and won, struggled and fought some more, but unfortunately this time was too much."
His family said on Instagram that he was recently baptised.