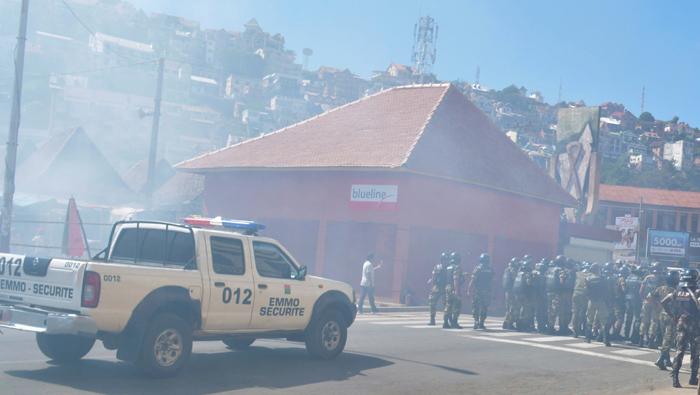 Antananarivo: One person was killed on Saturday when Madagascar police fired tear gas at opposition demonstrators protesting against new electoral laws they say are designed to lock out their candidate from a presidential election due this year.
Olivat Rakoto, director of the Joseph Ravoahangy Andrianavalona hospital in the city, said they had received 17 people with injuries from midday (0900 GMT) to 3 pm (1200 GMT).
"One person came but we could do nothing for him when he arrived," she said, referring to the dead person, one of the 17. Rakoto did not comment on the nature of the injuries but some witnesses at the hospital said some were caused by gas canisters.
Prime Minister Olivier Mahafaly said an investigation would be carried out and action taken against those responsible, adding the government would start talks on the new laws.
"The dialogue to find the consensus is what will enable us to arrive at durable solutions," he said on state radio. "The government is ready for dialogue to find this consensus."
Supporters of Marc Ravalomanana, a former leader of the Indian Ocean island nation, say the new electoral laws are designed to prevent him running in the election.
The opposition is also contending provisions on campaign financing and access to media in the laws. Ravalomanana, who was deposed in a 2009 coup, has teamed up with the man who succeeded him, Andy Rajoelina, to oppose the laws pushed by President Hery Rajaonarimampianina. Hundreds of protesters gathered in the centre of the capital early on Saturday to protest against the laws which were enacted by parliament earlier this month, before police fired dozens of teargas canisters at the crowd.
One opposition lawmaker accused the government of attacking opposition MPs while carrying out their work and demanded the president's resignation. "Hery Rajaonarimampianina has to resign, he attacks members of Parliament which are in the line of their duty," said Paul Bert Rahasimanana who represents a constituency in the capital.
"We just wanted to do some report on the adoption of electoral laws and he sends us forces of repression." Police later retreated from the scene outside the mayor's office, leaving about 1,000 opposition supporters protesting peacefully.
"We are here because we need freedom of speech and because we do not agree with the authoritarian government," said Fafah Rasoanirina, a 24-year old protester. The opposition says the law requires a presidential candidate to produce a report on all previous judicial convictions, which could be a disadvantage for their candidate.
Ravalomanana was convicted by a court when he was in exile after the 2009 coup for a range of offences. He has already said he will run in the election due before the end of this year though the precise date has yet to be set.