Ex-US presidents among mourners as Barbara Bush lauded at funeral 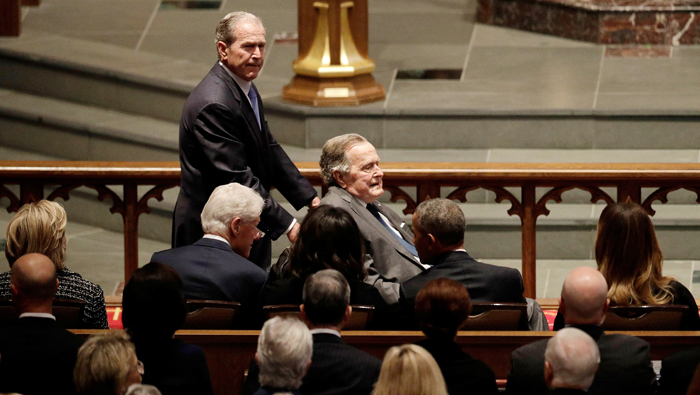 Houston: Former first lady Barbara Bush was remembered on Saturday as a sharp-tongued but caring figure whose devotion to her family was matched only by her commitment to public service. Four former U.S. presidents were among some 1,500 mourners who gathered at a Houston church for her funeral, after the matriarch of one of the country's most prominent political dynasties died on Tuesday at age 92.
Bush, the wife of the 41st president of the United States, George H.W. Bush, and the mother of the 43rd, George W. Bush, was lauded at a televised but invitation-only service at St. Martin's Episcopal Church, where she and her family have been members since the 1950s.
"She was candid and comforting, steadfast and straightforward, honest and loving," said the historian and author Jon Meacham, who wrote a biography of George H.W. Bush and was one of three eulogists whom Barbara Bush herself selected before her death.
"Barbara Bush and George Bush put country above party, the common good above political gain and service to others above the settling of scores," he said.
Former Presidents Barack Obama and Bill Clinton, current first lady Melania Trump, former Secretary of State Hillary Clinton and former first lady Michelle Obama were all on hand for the service. President Donald Trump, who clashed with the Bush family during his 2016 campaign, did not travel to Houston.
The White House said this week he wanted to avoid disrupting the service with added security. In a Twitter post, Trump said his "thoughts and prayers are with the entire Bush family."
Former President Jimmy Carter was overseas and unable to attend. Another of Bush's sons, former Florida governor and 2016 presidential candidate Jeb Bush, also delivered a eulogy, as did her longtime friend Susan Baker, the wife of former Secretary of State James Baker.
In their remarks, Meacham and Baker emphasized Bush's role as a mother and grandmother, with Baker describing her as a "tough but loving enforcer" whose 73-year marriage to her husband was a real-life fairy tale.
Hours before the service's scheduled start at 11am local time (1600 GMT), security was tight, with bomb-sniffing dogs checking media equipment and police officers searching bags. Guests arrived at a different church several miles away to be bussed to the venue, walking past a throng of media.
Bush made it possible for her husband to have "the arc of his life," said Karl Rove, who served as a chief political adviser for George W. Bush and spoke with him a few days ago.
"This is a family of great faith, of great conviction," Rove said. "He has every comfort, every confidence of where his mother is." Following Saturday's service, Bush will be buried on the grounds of the George H.W. Bush Library and Museum at Texas A&M University in College Station, next to her daughter, Robin, who died of leukemia at the age of 3.
The motorcade carrying her body will traverse both George Bush Drive and Barbara Bush Drive on its way to the burial site. Members of the public paid their respects on Friday, when Bush lay in repose at the church. The 93-year-old George H.W. Bush, seated in a wheelchair in front of the casket, greeted mourners in turn with a handshake.