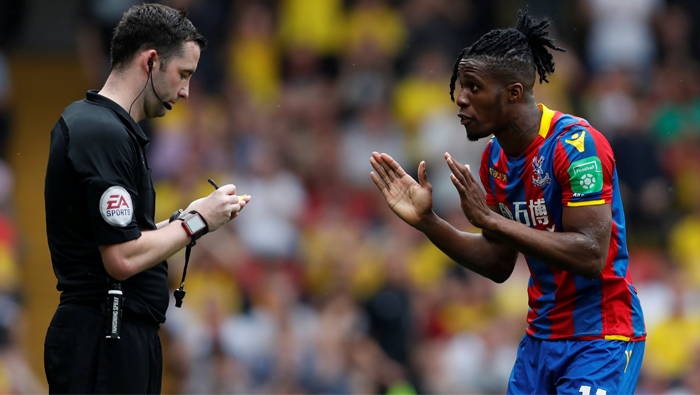 London: Watford and Crystal Palace continued to inch towards Premier League safety after a scrappy goalless draw at Vicarage Road on Saturday that means the home side have taken just two points from a possible 21.
Wilfried Zaha always looked the most likely to break the deadlock, with Watford struggling to control his trickery by whatever means possible.
The Palace winger repeatedly drew challenges from an increasingly desperate defence and twice had penalty appeals turned down, one of which led to a booking for simulation.
Watford's Abdoulaye Doucoure was so incensed by his behaviour that he was also yellow carded for pushing Zaha after one appeal. With his name already in the referee's notebook, Doucoure could easily have been dismissed.
Although neither side really deserved to win, Palace hit the post twice and Watford once.
The home side started with a greater sense of purpose and almost went in front when Palace keeper Wayne Hennessey had to be at his sharpest to prevent an own goal from Joel Ward.
The second half, though, largely belonged to the visitors as Zaha became increasingly influential and Luka Milivojevic was unlucky not to break the deadlock in the second half.
In the end, there were no goals but plenty of bookings with referee Chris Kavanagh issuing eight cards.
Watford defender Adrian Mariappa said: "It was a tough game. We take the point and the clean sheet. They've got a lot of good players and it's down to us to keep them quiet.
"It's a massive clean sheet for us. Everyone from top to bottom put in a real shift today. We’re fully focused on the rest of the games and it's a good opportunity to pick up some points."
The win leaves Palace six points clear of relegation with Watford three points and places above them in 12th.