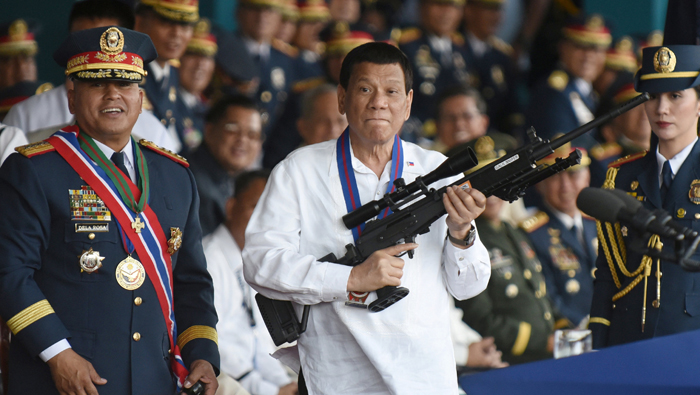 Manila: Philippine President Rodrigo Duterte said on Saturday he had set a 60-day timeframe for peace talks he is seeking to revive with communist guerrillas, urging the rebels' exiled leader to come home to hammer out a deal.
The conflict between the government and the New People's Army (NPA), the armed wing of the communist party, has raged for half a century and killed more than 40,000 people.
In February, a Norwegian diplomat met Duterte to try to convince him to restart negotiations that the president had scrapped in anger at what he considers duplicity by the communists.
Earlier this month Duterte ordered his cabinet to work on a truce to enable talks, but the communist rebels have rejected any preconditions.
Jose Maria Sison, leader of the Communist Party of the Philippines has been in exile in the Netherlands since his release from prison in the late 1980s. "I am talking to Sison now. It is an off and on thing (and) probably the military and the police have misgivings," Duterte said in a speech at a motorcycle clubs' convention in Legazpi in central Philippines.
"But my duty, my fundamental basic duty is to see to it that the country is peaceful," he said. Duterte said he had "created a small window (of) 60 days" for the talks and urged Sison to come home to the negotiating table. He did not say when the 60-day period would start.
He said he would pay for the rebel leader's expenses, including his air fare. Ending the conflict was among Duterte's priorities when he took office in 2016. But he abandoned peace efforts in November, infuriated by repeated rebel attacks during the talks.
On-off negotiations to end the revolt have been brokered by Norway since 1986. Earlier this month Duterte said the rebels must agree to a ceasefire, stop extortion activities and abandon their proposal of a coalition government, before resuming talks.
Sison has said he is hopeful that negotiations could end the insurgency.