At least 3 dead in Nicaragua protests 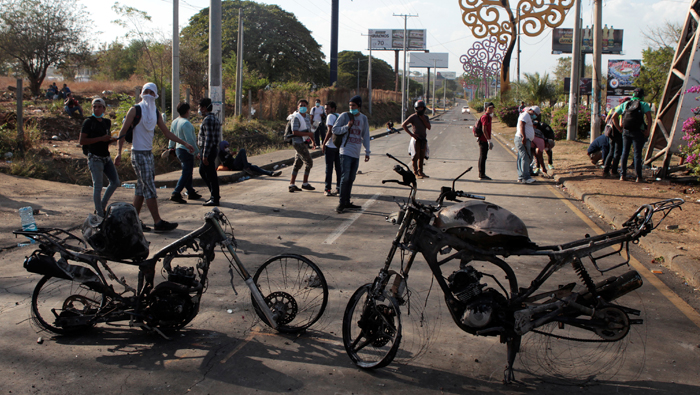 Managua: Protests in Nicaragua over changes to social security have led to the deaths of at least three people, including a police officer, the Red Cross said on Friday, heaping pressure on the leftist government of President Daniel Ortega.
Nicaraguans have been protesting for three straight days against government changes to social security, signed into law earlier this week, that increase worker contributions and lower pensions.
On Thursday, the police officer and a young protester were shot dead in the Nicaraguan capital, Managua, while another youth was shot in the city of Tipitapa, northeast of Managua, the nation's Red Cross told Reuters on Friday.
"We're not sure what happened. It's unclear. We don't know whose side (the victims were on), whether they were in favor or opposed," said Lisseth Guido, a spokeswoman for the Red Cross of Nicaragua.
Guido said some 48 people had received medical attention on Thursday for varying injuries due to the protests.
Violent protests continued into Friday as anti-riot police used tear gas, but it was not immediately clear if there were further casualties.
A former leftist guerrilla leader who critics accuse of trying to set up a family dictatorship, Ortega has been president since 2007, delivering solid growth by fusing socialist policies with an embrace of free markets.
But moves to increase worker contributions to social security and reduce pensions, which the government argues are fiscally necessary, has sparked a violent backlash.
The wave of protests is the biggest since Ortega took power, placing him alongside other Latin American leftists who have come under pressure after failing to consolidate economic gains.
After Ortega's government approved the social security overhaul this week, hundreds of retirees hit the streets in protest on Wednesday.
They were joined the next day by thousands of students and business workers in cities around the nation, sparking violent clashes with police. Protesters on Friday held signs saying: "no more repression" and "we are not scared."
Since the protests began, at least three local television stations that were broadcasting the protests live had their signals abruptly cut.
100% Noticias, the only TV station still without a signal, called the move "arbitrary and illegal."
Neighboring Costa Rica's foreign policy chief, Christian Guillermet, expressed concern on Friday about the violence and media censorship.
"It's always important to maintain social peace and in that sense we don't believe infringing on freedom of expression is conducive," said Guillermet.