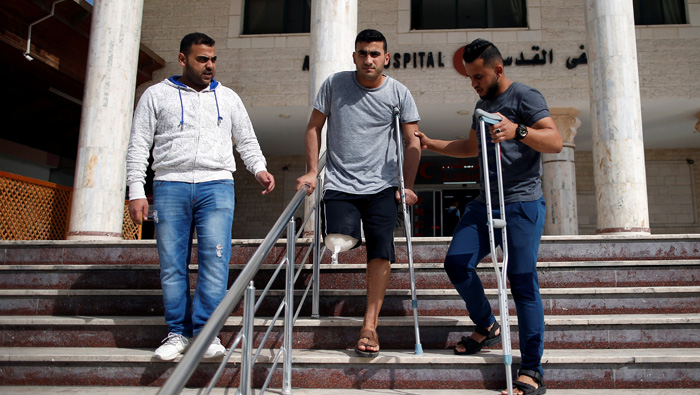 Gaza: A Gaza cyclist's dream of waving the Palestinian flag at the Asian Games has been shattered by an Israeli bullet that caused him to lose his leg after he joined a Gaza border protest.
Alaa Al-Daly, 21, had his right leg amputated after he attended the first day of what has been called "The Great March of Return,” a six-week demonstration at the frontier fence between the Hamas-ruled Gaza Strip and Israel.
Daly said that he and three friends cycled towards a border protest area on March 30, then walked to what they expected to be a non-violent demonstration. "I only went because it was a peaceful rally, I did not expect any harm to come to me."
Daly said he was 150-200 metres (500-660 feet) from the fence, and not involved in any belligerent action against Israeli troops, when he was struck by gunfire. He said his family asked that he be evacuated from Gaza to receive better treatment in the West Bank or in Israel, but Palestinian authorities told him that Israeli officials refused to let him exit Gaza.
The Israeli military said that senior commanders had ruled that apart from "exceptional humanitarian cases," medical treatment would not be given to Palestinians who participated in the border protests.
"It was decided that any request for medical treatment by a terrorist or a rioter who took part in violent events would be denied," an army statement said. "Foreign residents have no vested right to enter Israeli territory, including Palestinians living in the Gaza Strip."
Thirty-one Palestinians have been killed in the extended protest along the fenced 65-km (40-mile) Gaza-Israel frontier, pressing for a right of return for Palestinian refugees to what is now Israel. No Israeli casualties have been reported.
Gaza medical officials said at least 16 Palestinians were killed on March 30, the day that Daly was hit, and that 17 wounded people needed amputations.
Israel, which has drawn criticism from human rights groups for using live fire against the protesters, has accused the faction Hamas that rules Gaza of organising what it describes as "riots". Hamas has denied this.
Israel says most of those killed were militants trying to attack troops or to breach the border fence, and that its troops have responded with riot dispersal means and live fire "in accordance with the rules of engagement."
Israel has long dismissed any right of return for refugees, fearing that an influx of Palestinians would wipe out its Jewish majority. It argues that refugees should resettle in a future state that the Palestinians seek in the Israeli-occupied West Bank and in Gaza. Peace talks to that end collapsed in 2014. Daly, who trained for more than six hours a day for months to compete at the Asian Games in Indonesia, now accepts that his "dream of waving the flag of Palestine in Jakarta" is over. He is learning to walk with the help of crutches, and intends to compete in the future as an amputee.