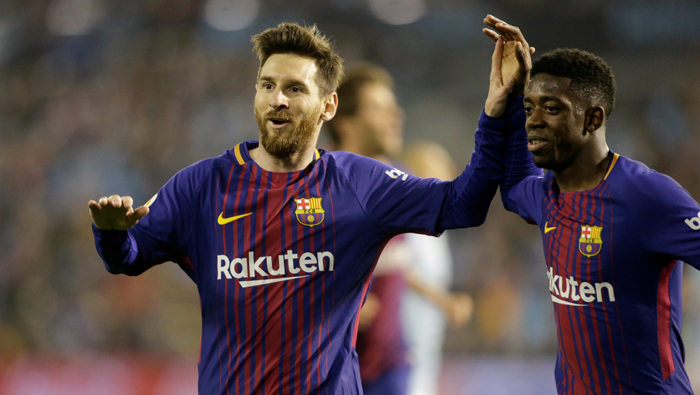 Barcelona: Runaway La Liga leaders Barcelona held on to draw 2-2 at Celta Vigo on Tuesday with a much-changed side as they survived having Sergi Roberto sent off late in the second half to preserve their unbeaten league record this season.
Barca lead the standings on 83 points after 33 games, 12 ahead of second-placed Atletico Madrid, who visit Real Sociedad on Thursday, while Real Madrid, a further four points back in third, host Athletic Bilbao on Wednesday.
France forward Ousmane Dembele struck his first goal in the Spanish top flight to give Barca the lead against the run of play in the 36th minute but Celta got a deserved equaliser just before halftime when Jonny Castro struck from close range.
Paco Alcacer restored Barca's lead in the 64th minute but Celta, who had beaten the Catalans 4-3 and 4-1 at home in the previous two seasons, continued to pour forward and caused the visitors' inexperienced defence problems.
Substitute Roberto was given a straight red card in the 71st for halting a surging run from Iago Aspas and the Spain striker levelled in the 82nd minute, bundling the ball in with the help of his arm and scoring his 20th league goal this season.
With the King's Cup final against Sevilla coming up on Saturday, Barca coach Ernesto Valverde made eight changes to the team that beat Valencia at the weekend, leaving out most of his regular starters including talisman Lionel Messi, Luis Suarez, Gerard Pique and captain Andres Iniesta.
The wholesale changes meant it was the first competitive game in 16 years in which Barca started without a player who had come through their academy and the lack of experienced personnel saw 24-year-old keeper Marc-Andre ter Stegen named as captain.
Celta dominated the final part of the game, despite Messi having come on earlier in the second half, but Barca clung on for the draw, staying on course to become the only team to finish a Liga season without losing.
"I wanted to make changes bearing in mind where we have come from and that we have a final coming up," said Barca coach Valverde, who was blamed after the shock exit to AS Roma in the Champions League quarter-finals for not rotating his squad more.
"When you make many changes you are taking a lot of risks but tonight I thought it was the right moment to assume those risks," he said.
The point means Barca can guarantee lifting the title if they win their next games at Deportivo La Coruna and Real Madrid but they could wrap up a 25th Liga crown before then if Atletico Madrid lose their next two against Real Sociedad and Real Betis.
"We don't take this draw as a good thing as we always want to win but we have to accept what we have," Valverde added.
"It was an end-to-end game but just as we were at our best we had the sending off and we had to reshape ourselves.
It's another point and now we need two more victories to become champions."
Barca's King's Cup final opponents Sevilla, who are seventh, were held to a 0-0 draw at relegation-threatened Deportivo earlier on Tuesday, while sixth-placed Villarreal beat Leganes 2-1 as they battle for a Europa League qualifying spot.(Reporting by Richard Martin; editing by Ken Ferris)