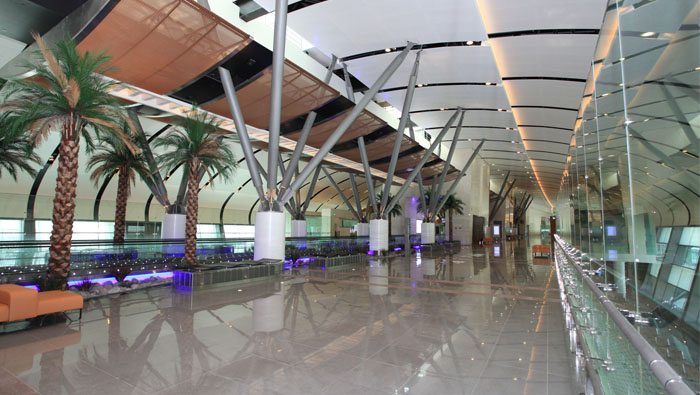 Muscat: Oman’s new international airport has already welcomed over one million passengers, as it gears up to celebrate its first month of operations, a senior official of Public Authority for Civil Aviation (PACA) said.
Speaking exclusively to the Times of Oman, Mohammed bin Nasser Al Zaabi, CEO of PACA, said: “The new Muscat International Airport welcomed 1,119,088 passengers since its operation on March 20 until April 15, 2018.”
He added that the total number of flights from March 20 to April 15, 2018, was 8,516. Regarding future plans for the new airport terminal, he added: “The current passenger capacity at the new airport’s terminal building is 20 million passengers per annum, however, it is designed to accommodate up to 56,000,000 passengers to meet the future demands.”
“The expansion is planned to be in the western wing opposite Al-Mawaleh city through phases two and three, while phase four will involve building a new terminal to the west side of the existing one. Overall, the new terminal is integrated in terms of meeting the current demand and future plans,” he further added.
Regarding what remains to be completed at the new airport, he said: “A majority of all the packages of the new Muscat international Airport development project are completed, apart from the catering building, aircraft maintenance hangar, the refurbishment of the old runway and other small auxiliary buildings.”
Passengers who have used the new airport were absolutely delighted. “It’s been some time coming, but it’s totally been worth the wait. After many months (in some cases, years), Muscat’s brand new state-of-the-art international airport finally opened last month. And I was lucky to travel via the first flight to Salalah,” one of them said.
Indian expat Satish said: “This [airport] is the future and has got everything under one roof.”
Compared with the old airport, passengers said the new Muscat International Airport has around 7,000 car parking spaces, all of which offer shaded car parking.
“At the old airport, the number of parking spaces was quite less,” Monoj, an Indian expat, said.
The new passenger terminal covers a total area of 580,000 square metres and is equipped with the latest technology and state-of-the-art facilities, which will help put it among the top 20 airports in the world by 2020.
The new terminal has also been designed with security and safety at its core, using state-of-the-art biometric smart technology to track any unauthorised access or inconsistencies.
Then, the traffic flow is much easier as the airport authorities have segregated arrivals and departures.
“The boarding bridges also cut down the time spent on travelling and movements,” passengers said.
Another striking feature is that the Muscat International Airport is a “silent airport”, ensuring passengers rely more on digital display boards for information about their flights.
Airline officials said very few passenger boarding calls are being made in the departure check-in areas and boarding gates area at the new terminal of the Muscat International Airport.