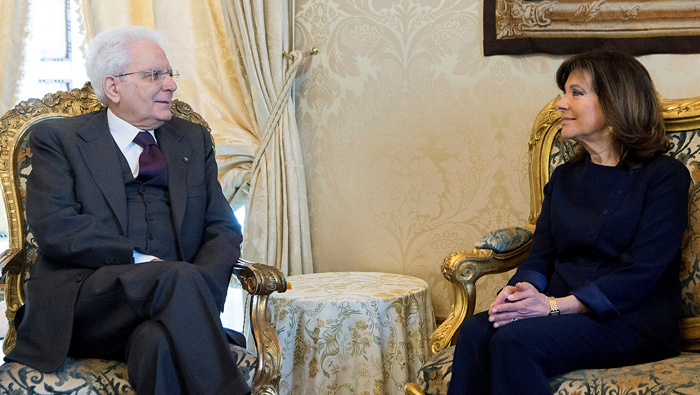 Rome: Italian President Sergio Mattarella on Wednesday asked the head of the upper house Senate to meet bickering party leaders to see if she can break the deadlock following inconclusive elections, in what immediately appeared a near-hopeless task.
The euro zone's third-largest economy has been under a caretaker government since the March 4 polls, when anti-establishment and far-right parties were the big winners at the expense of more mainstream groups.
Mattarella asked Senate chief Maria Casellati to explore the scope for a deal between a conservative alliance which won most seats at the election, and the anti-system 5-Star Movement which emerged as the largest single party.
He told her to report back to him on Friday, but her first meeting with 5-Star made no progress. 5-Star leader Luigi Di Maio said after the talks that his party would not consider governing with former prime minister Silvio Berlusconi's Forza Italia (Go Italy!) party, which is a core component of the rightist bloc. Casellati, 71, is a senior member of Forza Italia and is close to Berlusconi.
5-Star, which bases its appeal on a promise to clean up politics, refuses to countenance a deal with the 81-year-old media billionaire who has a conviction for tax fraud and is on trial for bribing witnesses - a charge he denies.
Mattarella turned to Casellati after holding two rounds of consultations with parties himself, which floundered against a series of vetoes and seemingly irreconcilable demands.
The conservative bloc, made up of the far-right, eurosceptic League, the much smaller nationalist Brothers of Italy party and the more moderate Forza Italia, fell less than 60 seats short of an absolute majority in the Chamber of Deputies.
"5-Star is ready to sign a government contract with the League and not with all the centre-right," Di Maio told reporters. He set a deadline for League leader Matteo Salvini to abandon Berlusconi, something Salvini has so far refused to do.
"I say clearly to Matteo Salvini that there's no time left, he must take a decision this week," Di Maio said.
If Casellati's efforts fail, pressure will grow on Salvini to break with Berlusconi and attention will also turn to the centre-left Democratic Party (PD) which has governed for the last five years and lost badly in last month's ballot.
The PD has said it plans to go into opposition and has rejected appeals from 5-Star to discuss a possible coalition. However, that determination may be waning.
On Tuesday the PD's interim leader Maurizio Martina said the party wanted to discuss concrete proposals with whoever was given a mandate to form a government. The proposals, centred on tackling poverty and increasing welfare, were close to the kind of policies espoused by 5-Star and were widely seen as indicating a willingness to negotiate with the party, which was founded by comedian Beppe Grillo.
However, the situation remains extremely fluid, partly because the PD is internally split between those openly advocating a deal with 5-Star and others, led by its former leader Matteo Renzi, who have ruled it out.
If all efforts to break the stalemate fail, Mattarella would have to call new elections, almost certainly in the autumn. The 45 days since the election are far from being Italy's longest post-vote stalemate. At the last election in 2013, 62 days passed between the ballot and the creation of a government.