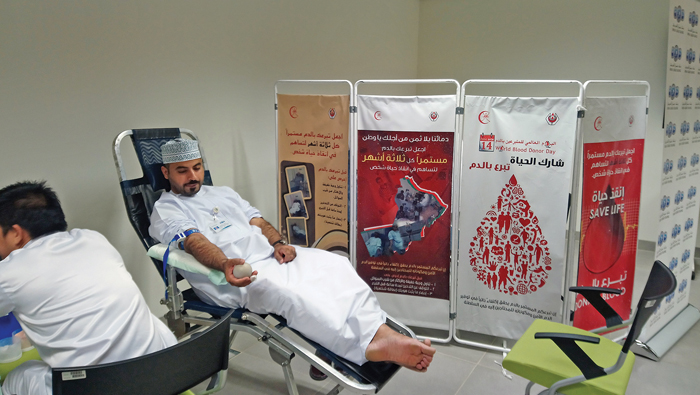 Muscat: As part of its commitment to the community, Oman Arab Bank (OAB) recently organised an internal Health Day and Staff Blood Donation Drive, titled “Save a life, give blood”, at its head office in Ghubra.
The event, which was held on April 16, was organised by the Social Committee of OAB in collaboration with the Ministry of Health. The drive was a grand success, with a large number of OAB employees volunteering to donate blood.
Commenting on the Blood Donation Drive, Hilal O. Al Siyabi, Head of CSR at OAB, said, “At OAB, we believe that we have a responsibility towards the local community. Donating blood is among the simplest forms of Corporate Social Responsibility, yet is amongst the most valuable ways of contributing to our community. This is primarily because of the ever-growing demand for all blood types and constant need for stocks to be replenished. As a result, every little bit helps save lives. Through such events, we aim to raise awareness over this cause, while also helping promote a healthy lifestyle amongst our staff.”
In addition to the Blood Donation Drive, the event was also intended to promote a healthy lifestyle. In order to do so, the Bank also partnered with a number of private clinics, which participated in the event to showcase their various offers and facilities. Healthy snacks and drinks were also served to all the visiting staff at the event.
“Even today, despite drastic advances in medical science, blood cannot properly be artificially created. That’s why blood donations are among the most precious things in the world. In fact, donated blood saves millions of lives every year,” added Al Siyabi.
“As such, on behalf of OAB, I would like to thank each and every employee who donated blood on this day, as well as the staff at the Ministry of Health and members of our Social Committee who helped in hosting such a successful event.”
OAB is engaged in various initiatives—such as this blood donation drive—throughout the year, all of which are intended to enhance the social wellbeing of the community in which they operate.
In line with its CSR objectives, a significant number of these initiatives and projects involve the direct support and participation of its employees, through invaluable work done by the Social Committee at OAB.
OAB is one of the first banks to be established in Oman, with a rich and proud history.