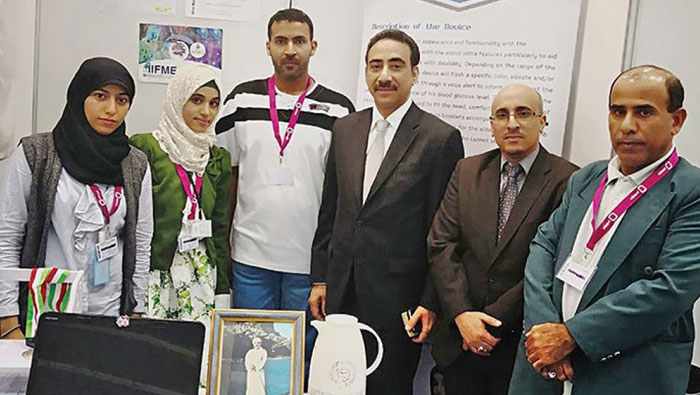 Two medical students from the University of Nizwa, Amira Al Abri and Ishar Al Malki, won a gold medal at the 46th Geneva exhibition of inventions earlier this week, for inventing a device to help the elderly and those with disabilities easily monitor blood sugar levels.
Another student, Al Muhanad Al Nudhairi, won a bronze medal for building a high-density plastic recycling machine.
Amira said, “Winning this gold medal from among 123 medical inventions was indescribable. We had almost lost hope after seeing the level of competition, but I’m happy to take the gold back home. The initiative to take part in this exhibition was ours, and the university streamlined the entire process by offering support.”
Describing the device, she said, “This particular measuring device for blood sugar is unique. It allows the elderly and disabled, including the blind, to take their own measurements because it is visual, audio-assisted, and vibrates as well.”
**media[859738]**
Call for support
Amira hopes to find support to commercially manufacture the device. “I truly hope to see private and public support for the device. So far, we have an idea and a prototype we made by pooling together our resources. This can become a real technology that Oman manufactures.”
Injazat Shabab Oman, a platform that monitors the achievements of Omani youth, said, “Al Nudhairi also won a bronze medal for inventing a recycling device for polyethylene plastics.”
The exhibition’s official website says there were 1,000 new inventions and products, 700 exhibitors from 40 countries, and 57,000 visitors.