Children of Iraqi village return to school after 14-year break 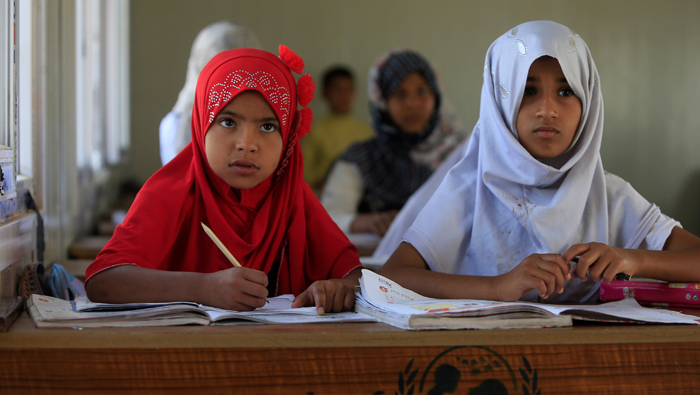 Al Zuhoor (Iraq): Iraq’s Kawliya minority, also known as the country's gypsies, have long been marginalized by society.
But in Al Zuhoor, they finally have an elementary school again - nearly 14 years after the village’s only school was ransacked and destroyed at the hands of an extremist militia.
Known locally as the Gypsies’ Village, Al-Zuhoor is near the city of Diwaniya, 150 km (95 miles) south of Baghdad.
Roughly 420 people live in mud houses and reed huts lining unpaved streets.
With no basic services, the village's primary school and clinic, built by the government of Saddam Hussein, were damaged by an extremist militia in a mortar attack on the village in late 2003, months after a US-led invasion toppled him from power.
The school was reopened with the help of UN children's fund UNICEF after a campaign started by civilian activists on Facebook called I am a Human Being.
It is made of a cluster of caravans provided by UNICEF on Al Zuhoor's outskirts.
The school has 27 children aged six to 10 and a teaching staff of a headmaster and two teachers.
Malak Wael, 10, said her family encouraged her to come to school and learn.
Headmaster Qassim Abbas Jassim said the school and the village suffer from a lack of electricity and safe drinking water.
Scorned by many Muslims and barely tolerated by the rest of society, Iraq's Kawliya live a precarious existence.
Lacking education or skills, they form one of the lower rungs of Iraq's social system, and are not granted Iraqi citizenship.
Manar AlZubaidi, representative of the I am a Human Being group who lobbied for a year for the construction of the school, urged the government to grant the Kawliya Iraqi nationality to help their children continue with their studies and get jobs.
Under Saddam, the Kawliya had some protection from persecution, Iraqis say.
The safety net disappeared with Saddam's overthrow, leaving them open to the whims of religious militia groups contemptuous of their freewheeling ways.
The Kawliya speak Arabic and profess belief in Islam.
Most originated in India, although a few came from other Middle Eastern countries.