In Syria's Raqqa, corpses still lie in the rubble 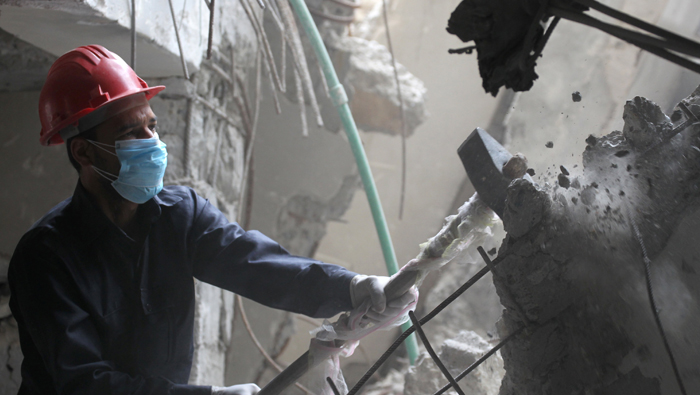 Raqqa (Syria): The stench of rotting corpses rises from piles of rubble and destroyed buildings that line the streets of Syria's Raqqa, serving as a bitter reminder of the brutal battle for the recapture of the former IS stronghold.
IS declared a caliphate in 2014 and at the height of its power ruled over millions of people in parts of Syria and Iraq.
The militant group had declared Raqqa the capital of its self-proclaimed state.
But the city was retaken by US-backed militias last October, after a four-month battle that left hundreds of civilians dead and most of its neighbourhoods flattened.
Rescue workers say they are struggling to retrieve dozens of bodies still trapped under mounds of debris around the city.
"We are calling for more support, this support must include machinery which we need desperately in order to continue our work,” said Yaser Khamis, head of the First Responders Unit formed by the Raqqa Civil Council, set up to rebuild and govern the city.
In one building, rescuers were cutting through wires and lifting heavy slabs of concrete in search of corpses or body parts trapped underneath. Hours later, workers said they were able to retrieve 20 bodies.
But Khamis fears they are not working fast enough.
"The danger alarms are beginning to sound in this area, diseases and epidemics are starting to spread,” he said.
"We currently have more than 114 requests for digging and exhumation of bodies.”
According to a 2009 World Health Organisation report, there is no clear evidence that links corpses to the spread of epidemic diseases.
However, rescuers who routinely handle dead bodies risk contracting tuberculosis and gastrointestinal infections, as well as potential effects on mental health.
Since starting their operations, the First Responders Unit say they have exhumed more than 500 corpses.
Forensic pathologists examine the bodies and try to identify them.
"We check the body, its general condition, whether it is male or female, child or elder. We look at body parts, some rotting,” said Dr Abu Ibrahim. But most remain unidentified and are buried in a special graveyard near the city.
Rebuilding and restoring the city, which was once home to more than 200,000 people, is proving to be a monumental task.
During a recent visit to the town, Syria country director for the United Nations World Food Programme, Jakob Kern, estimated that "two thirds" of Raqqa had been destroyed in fighting.
The Raqqa Civil Council has said it will take 5.3 billion Syrian lira (about $10 million) a year to restore power and water supplies, roads and schools.
The United States backed the campaign to drive IS from Raqqa, and in February said it would invest money in "stabilisation" efforts there.
But last month, US President Donald Trump decided to freeze more than $200 million for recovery efforts in Syria while Washington reassessed its role in the conflict, administration officials said.