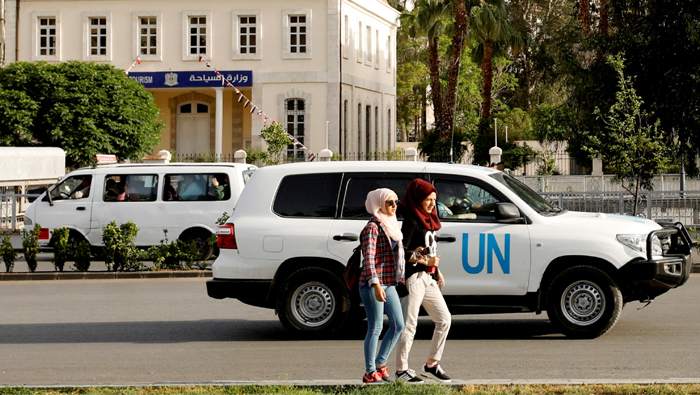 Beirut: Global chemical weapons inspectors finally reached the Syrian town on Tuesday where a suspected poison gas attack took place, days after the United States, Britain and France launched missile strikes to punish Damascus for it.
Syrian state television reported that the experts from the Organisation for the Prohibition of Chemical Weapons had entered Douma, where Western countries say scores of civilians sheltering from bombs were gassed to death on April 7.
France said it was very likely that evidence of the poison gas attack was disappearing before the inspectors could reach the site.
Syria and its ally Russia deny that any chemical attack took place.
Douma is now in the hands of government forces after the last rebels withdrew just hours after US, French and British forces fired more than 100 missiles to hit three suspected chemical weapons development or storage sites.
Saturday's air strikes were the first coordinated Western strikes against Assad's government in a seven-year war that has killed more than 500,000 people and drawn in global powers and neighbouring states.
The intervention threatened to escalate confrontation between the West and Russia but has had no significant impact on the ground, where President Bashar Al Assad is now in his strongest position since the war's early days and shows no sign of slowing down his campaign to crush the rebellion.
The Syrian army began preparatory shelling on Tuesday for an assault on the last area outside its control near Damascus, a commander in the pro-government alliance said.
Recovering the Yarmouk camp and neighbouring areas south of the city would give Assad complete control over Syria's capital.
Yarmouk, Syria's biggest camp for Palestinian refugees, has been under the control of IS militants for years.
Although most residents have fled, the United Nations says several thousand remain.
Assad has benefited from Russian air power since 2015 to regain large swathes of Syria.
The suspected poison gas attack creates a conundrum for Western powers, who are determined to punish Assad for using chemical weapons but have no strategy for the sort of sustained intervention that might damage him.
Damascus and Moscow have broadcast statements from hospital workers in Douma - which medical aid groups operating in rebel areas have dismissed as propaganda - saying that no chemical attack took place.
Syrian state media reported that missiles had again targeted an airbase overnight, but the commander in the regional military alliance backing the government, speaking on condition of anonymity, later told Reuters it was a false alarm.
The commander said the new offensive would target IS and Nusra Front militants in Yarmouk camp and Al Hajar Al Aswad district.
Rebels in the adjoining Beit Sahm area had agreed to withdraw on buses, he said.
A government media tour on Monday of Douma, the biggest town in the former rebel enclave of eastern Ghouta just outside Damascus, revealed severe destruction and the plight of residents who had survived years of siege.
The assault on eastern Ghouta began in February and ended in government victory on Saturday when rebels withdrew from the town.
All the rebel groups controlling areas of eastern Ghouta eventually agreed surrender deals that involved withdrawal to opposition-held areas of northwestern Syria.
After the recapture of eastern Ghouta, Assad still has several smaller pockets of ground to recover from rebels, as well as two major areas they hold in the northwest and southwest.
Besides the pocket south of Damascus, rebels still hold besieged enclaves in the town of Dumayr northeast of Damascus, in the Eastern Qalamoun mountains nearby, and around Rastan north of Homs.
The pro-government commander said the army had prepared for military action in the Eastern Qalamoun, but that Russia was working on securing the rebels' withdrawal without a battle.
State television said on Tuesday that rebels in Dumayr had also agreed to withdraw.
In Idlib in northwest Syria, the largest area still held by rebels, a government assault could bring Damascus into confrontation with Turkey, which has set up a string of military observation posts in the area.
Ali Akbar Velayati, a top Iranian official, said during a visit to Damascus last week that he hoped the army would soon regain Idlib and areas of eastern Syria now held by an alliance of Kurdish and Arab militias backed by Washington.