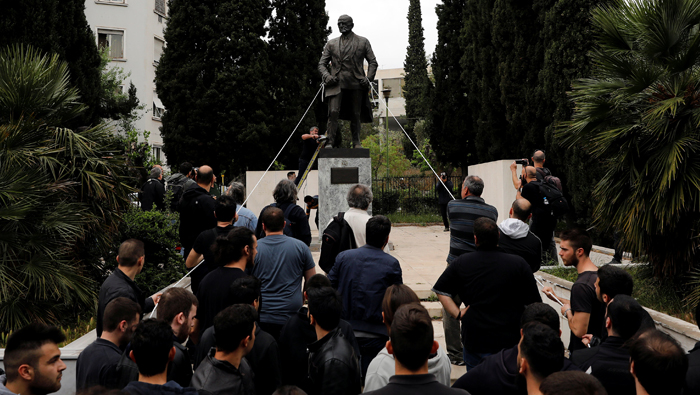 Athens: Greek communist party (KKE) supporters tried to take down a statue of former US president Harry Truman in Athens on Monday during a protest against air strikes on Syria by the United States, Britain and France.
Protesters used a metal grinder to try to cut off the statue's feet and tug it down with ropes before riot police intervened and fired tear gas to disperse the crowd.
The statue suffered minor damage.
At least three protesters were injured, with blood trickling from their heads, a Reuters witness said.
Several hundred KKE supporters joined a march to the US Embassy, a couple of miles from the statue, in the third demonstration in Athens against Saturday's air strikes on what Western powers said were Syrian chemical weapons installations.
"What we did today is a symbolic move against the US and the war (in Syria)," said Yorgos Perros, a member of the communist-affiliated union PAME.
"The statue is a symbol of imperialism and the United States in Greece."
The 12-foot, bronze Truman statue, also not far from the prime minister's office, has been a regular target of protesters who have vandalised or attacked it with paint against what they call American "imperialism" in Greece.
Many also believe Washington backed the military junta that ruled Greece from 1967-74 as well as the Turkish invasion of Cyprus in 1974 following a brief Greek-backed coup.
The statue had to be removed and restored in 1986 after being bombed.
Truman was US president from 1945 to 1953.