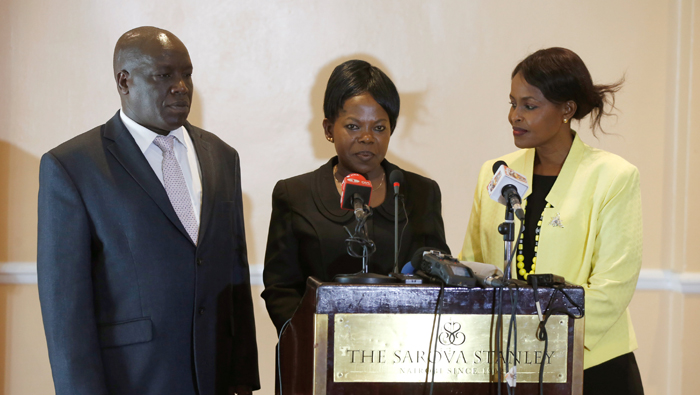 Nairobi: Three Kenyan election officials resigned on Monday, increasing chaos at the electoral Commission following last year's botched presidential vote that had to be rerun and was then boycotted by the opposition.
The resignations leave only two commissioners and the chairman at the Independent Electoral and Boundaries Commission (IEBC) which last week sent its chief executive on three months’ compulsory leave pending an audit on procurement matters.
"The events related to the purported vote (to suspend the CEO) have greatly shaken our already feeble confidence in the chair," IEBC Vice Chairwoman Consolata Nkatha Maina and commissioners Margaret Mwachanya and Paul Kurgat said in a statement, adding that not all of the six commissioners were present, as required, when the vote happened.
IEBC Chairman Wafula Chebukati said he had learned of the commissioners' resignation from news reports and would respond after he is formally informed.
Senate majority leader Kipchumba Murkomen said Chebukati and the two remaining commissioners should resign within a week or a tribunal would be formed to investigate them.
"My call for IEBC Commissioners to resign is informed by recent wrangles linked to the fight for tenders plus control and manipulation of IEBC staff," Murkomen said on Twitter.
Last year's election re-run raised fears of a return to political violence in Kenya where more than 1,200 people were killed after a disputed poll in 2007, although President Uhuru Kenyatta and opposition leader Raila Odinga appeared to put their fierce rivalry behind them last month.
Even before the August 8 vote, many Kenyans, including Odinga, were querying IEBC's ability to ensure a free and fair election.
A few days before the ballot, a commission official was found dead in unclear circumstances.
In October, another commissioner, Roselyn Akombe, quit a week before the rerun, saying she and her staff had been repeatedly threatened.