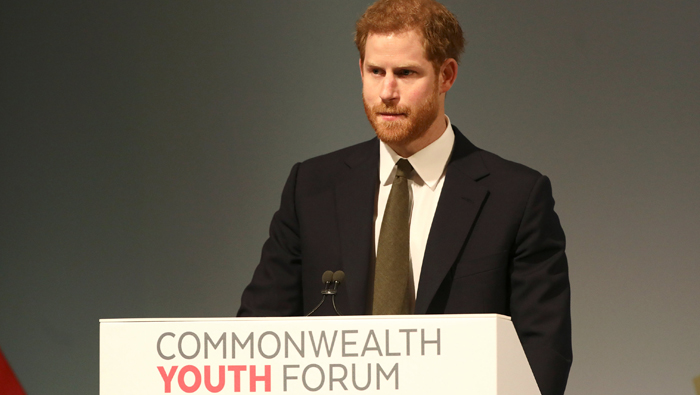 London: Prince Harry has been appointed a Commonwealth youth ambassador, his highest-profile public role to date and a job that will see him working with his future wife encouraging young people to use the network of mostly former British colonies.
Queen Elizabeth awarded the position to her 33-year-old grandson who is fifth-in-line to the throne and has led a rebranding of the monarchy in a bid to make it more modern and relevant.
"I know that serving as ambassador to young people I'm going have to try to keep up with you all ... my job will be to listen to you, my duty will be to ensure that your ideas, concerns, thoughts and hopes are heard," Harry told the opening of a Commonwealth forum discussing youth issues. The announcement coincides with the start of a summit of the Commonwealth Heads of Government in London this week, which will seek to boost the network at a time when Britain is negotiating its departure from the European Union.
"I'm also incredibly grateful that the woman that I am about to marry, Meghan, will be joining me in this work, in which she too is hugely excited to take part in," the prince added, drawing applause and cheers from the audience.
Harry will marry American actress Meghan Markle on May 19.
In a statement, Buckingham Palace said more than 60 per cent of the Commonwealth's 2.4 billion people were under the age of 30.
The Queen is the head of the Commonwealth, but questions have been raised over whether her son and heir, Prince Charles, should succeed her.
"The Queen clearly is personally very committed to the Commonwealth but after her, maybe it's a time to say 'well actually the Commonwealth should decide who its own president is on a rotational basis'," Jeremy Corbyn, leader of the opposition Labour Party, told the BBC on Sunday. Foreign minister Boris Johnson said it was "a matter for the 53 to decide".
In his opening speech, Harry praised the queen's role in the development of the Commonwealth, calling her "the ultimate source of guidance in all things Commonwealth," citing a speech she made in 1947.
"She said that whether her life be long or short, it would be dedicated to the service of the people of the Commonwealth. All of us here today can be grateful that it is a long life the Queen is still enjoying," he said.