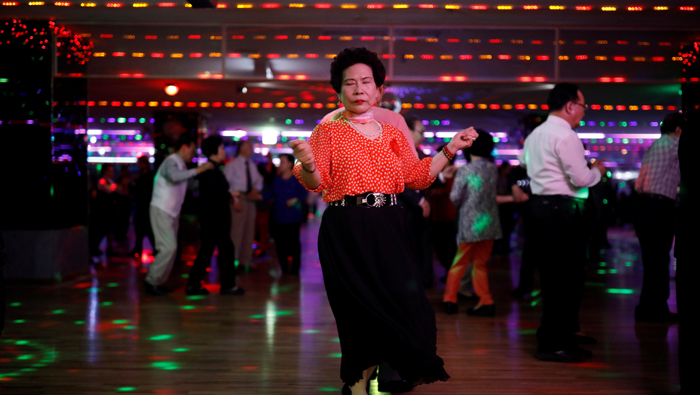 Seoul: A discotheque hidden among the back alleys of eastern Seoul is packed with hundreds of grey-haired couples on a Monday afternoon, dancing to local hits from the 1960s in a basketball court-sized hall.
Kim Sa-gyu, 85, calls it his "playground."
"What else would I do all day? My family is busy with work. I hate going to senior centers cause all they do there is smoking," said Kim, wearing a beret as he sat on a bench at the edge of a dance floor decorated with fairy lights and mirror balls.
Seven days a week, he gets up at 5 am, has breakfast with his son and two grandchildren, gets an hour of massage therapy to relieve knee pain, then hops on a bus.
His destination is the daytime disco for the elderly in New Hyundai Core.
Kim, who has been jobless since retiring as a hospital administrater 20 years ago, is among about 1,000 customers each weekday at the disco, called a colatec.
It is one of nearly 1,000 such facilities around the country.
Almost 2,000 people visit on a weekend day, said owner Choi Jung-eun.
Colatecs, a portmanteau of cola and discotheque, have arisen to serve South Korea's rapidly ageing population, as a growing number of lonely, impoverished and ailing people rediscover ways to entertain themselves after decades of hard work.
Some are here because they simply don't feel welcome at home.
"My wife yaps at me for breathing if I stay home. I love this music and no one minds me here," a grey-haired man who identified himself only as 'white boots' said, after paying an entrance fee of 1,000 won (90 cents) - a fraction of what swanky clubs in Seoul's affluent Gangnam charge their youthful clientele.
Well-dressed patrons can pay another 500 won for coat-check service.
And despite the name, the disco's best-selling beverage is 2,000 won probiotic yogurt, not cola.
The generation that helped rebuild Asia's fourth-largest economy from the ruins of the 1950-1953 Korean War is now the poorest and most depressed among member countries of the Organisation for Economic Co-operation and Development.
The relative poverty rate of South Korea's elderly stood at 49.6 per cent in 2013, four times the OECD average, according to the latest available data.
The elderly suicide rate rose from 35 per 100,000 persons in 2000 to 82 in 2010, also far above the OECD average of 22.
South Korea is ageing faster than any other developed country, yet there are few post-retirement jobs, or even cheap leisure, available for the elderly.
By 2050, there will be 71 people aged 65 and over for every 100 people aged 15-64 in South Korea, up from just 17.3 per 100 in 2014, according to OECD forecasts.
That will make it the third-oldest country in the world about wealthy nations, behind Japan and Spain.
Heading to a colatec is now they only way many senior citizens can find room to breathe, several customers told Reuters.
Kim In-gil, still haunted by painful memories related to his failed businesses during the 1997-1998 Asian financial crisis, says two hours of dancing four times a week helps rid him of "suicidal thoughts" from time to time.
"If you have music and a partner, you can put all other thoughts out of your mind," Kim said as beads of sweat dripped off his nose.
Colatecs began to spring up in the late 1990s as a no-alcohol dancing club for teens, but soon started to attract the elderly as their main customers.
Jitterbug instructor Song-ah's online videos about how to dance at a colatec sparked interests after she appeared in a TV commercial for insurer LINA's pension products.
A cable TV channel offering dancing tutorials for the elderly, called Silver-I, is also popular.
At the New Hyundai Core colatec, a dance instructor walked around the dance hall searching for dancers who looked lost or lonely.
Three full-time matchmaking ladies helped dancers who were too shy to find a partner.
"Those helpers sometimes take me to new woman and put our hands together to dance. I buy them a bottle of Will during our tea breaks," the 85-year-old Kim said, referring to the in-house cafe's best-selling drink, a local probiotic yogurt.
Colatecs do more good than harm, says Joo Won, an economist at the Hyundai Research Institute.
"We have one unhappy ageing society that needs support both from the public and the government. Places like colatecs need to be nurtured," Joo said.
Choi, the owner of New Hyundai Core colatec, said her business made her feel good too.
"My take from running this place is knowing that these old people have a place to go to when they wake up. They can't afford to go travel abroad or play golf every day," Choi said.
She added that she had some senior-friendly expansion plans.
"I also plan to open a acupuncture clinic upstairs, so that my customers can take care of their joints before and after dancing," she said.