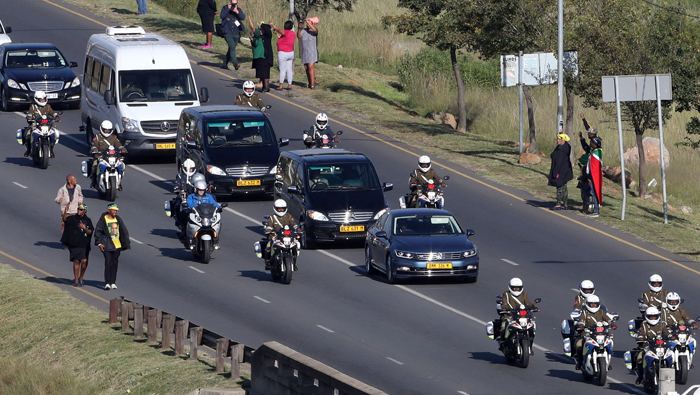 Soweto (South Africa): South Africa laid to rest anti-apartheid heroine Winnie Madikizela-Mandela on Saturday, after 40,000 people from across the political spectrum mourned her at a funeral ceremony in her township of Soweto.
Madikizela-Mandela's death on April 2 at the age of 81 after a long illness was met by an outpouring of emotion across the country, with the ruling African National Congress (ANC) and opposition parties holding memorials to remember her courage in the struggle to end white-minority rule. The official funeral service for the ex-wife of the late Nelson Mandela took place on Saturday morning in Soweto -- the Johannesburg township at the forefront of the battle against apartheid where she lived.
President Cyril Ramaphosa said that, just as South Africa grieved for Madikizela-Mandela, it was comforted by the profound meaning of her life. "In death, she has demonstrated that our many differences along political party and racial lines and the numerous disputes we may have are eclipsed by our shared desire to follow her lead in building a just, equitable and caring society," he said.
"Loudly and without apology, she spoke truth to power. It was those in power who, insecure and fearful, visited upon her the most vindictive and callous retribution. Yet, through everything, she endured. They could not break her. They could not silence her."
The afternoon burial ceremony at Fourways Memorial Park Cemetery, north of Johannesburg, ended a nearly two-week mourning period declared by the government.
Earlier, mourners sang and cheered as Madikizela-Mandela's body was brought into the 40,000-seat Orlando stadium, filled to capacity for the funeral service.
Many mourners were clad in the green and yellow colours of the ANC.
Members of the leftist Economic Freedom Fighters (EFF) party also attended in large numbers. EFF leader Julius Malema, an admirer of Madikizela-Mandela who echoes her fiery rhetoric, said she had always put the country "above her own personal safety" in the fight against apartheid.
"She lived in constant naked contact with danger, prepared to lose her life, even the lives of her own children, who were put into danger by her political activities," Malema said to loud cheers in the stadium.
During Mandela's 27-year incarceration for his fight against apartheid, Madikizela-Mandela campaigned for his release and for the rights of black South Africans undergoing detention, banishment and arrest.
"I appreciate many things about her. She represents a fighting spirit because, even though she lived through the apartheid era, she never gave up," said 20-year old college student Gift Mokale.
"I'm very grateful to be here today."
Also present at the funeral service were former presidents Thabo Mbeki, Kgalema Motlanthe and Jacob Zuma, dignitaries from African countries and celebrities such as British supermodel Naomi Campbell and U.S. civil rights activist Jesse Jackson.
For many South Africans, the most memorable image of Madikizela-Mandela is of her punching the air in a clenched-fist salute as she walked hand-in-hand with Mandela out of Victor Verster prison, near Cape Town, on February 11, 1990.
For husband and wife, it was a crowning moment that led four years later to the end of centuries of white domination when Mandela became South Africa's first black president.
Madikizela-Mandela's legacy, however, was later tarnished.
As evidence emerged in the dying years of apartheid of the brutality of her Soweto enforcers, known as the "Mandela United Football Club", some South Africans questioned her 'Mother of the Nation' soubriquet.
In 1991, Madikizela-Mandela was convicted of kidnapping and being an accessory to assault, but her six-year jail sentence was reduced to a fine and a two-year suspended sentence on appeal.