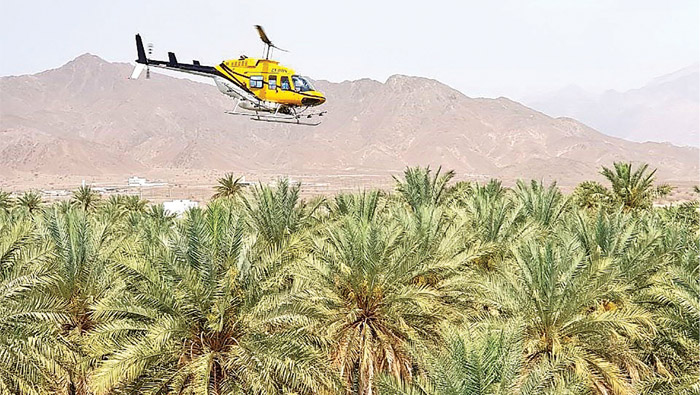 Muscat: The Ministry of Agriculture and Fisheries announced the start of air spraying of insecticides via a helicopter, to fight the dubas bug in a number of states in Al Dakhiliah and Al Sharqiyah Governorates.
The ministry called on farmers, citizens, and residents to take necessary precautions during the spraying period and to follow the spraying schedule to avoid infection, as reported by the media.
“The ministry calls on farmers, citizens, and residents to take precautions to protect drinking water sources and beekeepers, and to protect their animals, provide a quantity of feed before spraying, cover cars or move them outside the spraying range and to prevent children from leaving the house during spraying,” the Ministry of Agriculture and Fisheries said in an announcement.
Spraying will take place in the wilayats of Ibra and Al Qabal on Friday; Badia, Wadi Bani Khalid, Al Kamel and Al Wafi on Saturday; Jalan Bani Bu Hassan on Sunday; and the Wilayat of Sur on Monday.
Spraying will take place in the northern regions of the Sultanate where palm trees grow in abundance. The spraying programme will cover an area of 20,000 acres. The ministry sprays the affected areas twice a year to protect date crops and palm trees in spring (March and April) and during autumn (September and October).
“Spraying areas are determined by the severity of the infection in those areas, and the extent of the dubas bug, because the insect accumulates on the leaves and inhibits the breathing of the plant and its productivity,” said Mahmoud Al Nabhani, director of the crop protection department at the Ministry of Agriculture and Fisheries.
“Research has been conducted by the ministry to treat the insect through biological control rather than spraying to avoid the side effects of aerial spraying, but that research is still under study,” Al Nabhani added.
The Ministry of Agriculture and Fisheries warned residents to avoid harvesting fruits and crops that have been sprayed for at least a week from the date of spraying. If utensils, clothes or any other tools are exposed to the pesticide, they should be thoroughly washed with soap before use.
“One of the things that hinders the treatment campaigns and prevents the eradication of the insect is the lack of commitment by farmers to the conditions of planting palm trees. They don’t leave enough space between trees and intensify the palms in narrow areas, providing a suitable environment for the growth of the insect, its reproduction and transmission between trees,” said Al Nabhani.