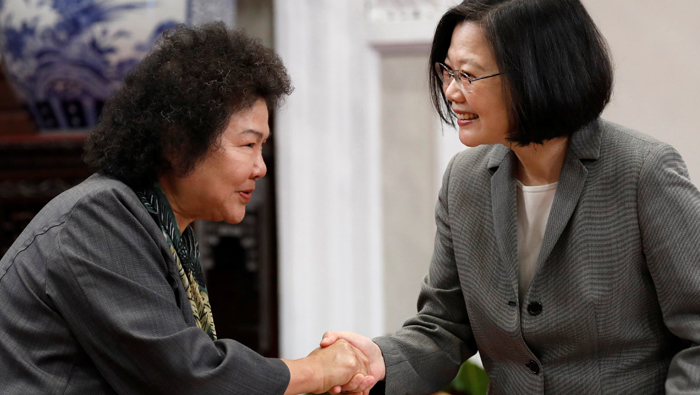 Taipei: Taiwan President Tsai Ing-wen on Wednesday named a key ally to head her office and lead communications efforts aimed at shoring up her wilting approval ratings in the runup to local elections this year. The appointment comes a day after Chinese President Xi Jinping urged Taiwan's business community to shun any idea of independence for the self-ruled island and promote peace and stable ties with the mainland. Chen Chu, now the mayor of Taiwan's southern city of Kaohsiung, takes charge on April 23, as dissatisfaction with some economic policies has pushed Tsai's approval rating to its second lowest level since she took office in 2016. "We very much look forward to the important role of 'Sister Chu'," Tsai told a news conference. "During the process of pushing reforms, to have sufficient communications and dialogues between the government and society is very important." Taiwan's mayoral and magisterial elections are set for November 24 this year. Chen, the manager of Tsai's successful 2016 election campaign, is a colourful figure of the ruling Democratic Progressive Party (DPP) who has visited China twice, in 2009 and 2013. As a former political prisoner at the forefront of Taiwan's struggle for democracy, Chen has not shied from irritating Beijing, but has repeatedly called for better communication with China.