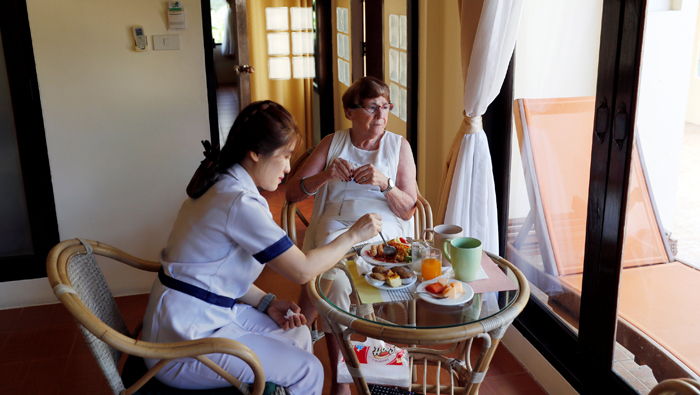 Bangkok: At 79, Thai businessman Boon Vasin's latest $500 million venture is a bet on a market he knows well - looking after Thailand's rapidly growing population of old people.
Not only is Thailand ageing faster than its neighbours, but it is also becoming an increasingly popular retirement option for foreigners attracted by its agreeable climate, low living and health costs and culture of service.
"We will look after them from their waking hours until they go to sleep," said Boon, chairman of the Thonburi Healthcare Group Pcl.
"This group has big spending capacity."
His Jin Wellbeing County is a 'medical city' for Thai and foreign retirees being built across more than two hectares (5 acres) on the outskirts of Bangkok.
The first of nearly 500 housing units being sold in an initial phase are being marketed for nearly $130,000, plus additional fees of 7,000-8,000 baht ($224 - $385) a month for meals and services ranging from fitness sessions to excursions.
Boon predicts care services will yield recurring profits of up to 240 million baht each year from the project, plus unit sales and medical services. Together with China, Thailand is aging much faster than its regional neighbors.
By 2040 it is expected to have the highest share of elderly people of any developing country in East Asia, according to the World Bank. Thailand has 7.5 million people aged 65 and over, a figure projected to swell to 17 million by 2040 - more than a quarter of the expected population.
That's partly due to improving medical care extending life expectancies, but also a fall in birth rates from an average of more than six children per woman in 1960 to 1.5 in 2015.
In the past, generations of the same Thai family lived under the same roof and elderly were cared for by their offspring.
But the changing population balance as well as a shift from the countryside to towns means that's increasingly impractical.
Real estate developers are already tapping the market.
A residential project worth $160 million by developer Magnolia Quality Development Corporation, which is scheduled to open in 2022, will include a wellness centre offering elderly care services with specialists in areas such as dementia, said chief executive Visit Malaisirirat.
All the homes in SC Asset Corporation Pcl's $350 million luxury brand are equipped with designs aimed at the elderly, the group's marketing head, Nattagit Sirirat, told Reuters.
This includes shock absorbent floors and wheelchair access.
"We worked with Siam Cement, which designed a shock absorbing compound to use in flooring," he said.
The company was "closely studying retirement homes and communities" and was considering a partnership with a local private hospital operator to build a retirement community, he added, while declining to divulge predicted returns.
For his care home, Boon is focusing on people with an income of over 100,000 baht a month - and not just Thais.
The aim is to sell at least 20 per cent of the project to foreigners, who are targeted along with locals in marketing materials.
"We have Chinese and Japanese buyers who are interested," he said.
Boon has partnered with a Chinese agent, Shanghai Losen Sale, to sell 90 units worth 671 million baht to Chinese customers.
Thailand did not make the top ten list of International Living's 2018 index for the best places to retire for US expats.
Costa Rica was at number one and neighbouring Malaysia at number five.
International Living described Malaysia as "easy, English-speaking and First World."
English is still not widely spoken in Thailand, particularly outside of the major cities.
The state has tried to address this by promoting English as a second language.
Many parts of Thailand away from the well-known expatriate enclaves also fall decidedly in the developing countries category.
But it is becoming an increasing draw for retirees.
The number of foreigners over 50 who have applied for retirement visas to stay in Thailand almost doubled to nearly 73,000 in 2017 from fewer than 40,000 in 2013, according to immigration bureau data.
At the top of the list are Britons - and last year the government launched a campaign to specifically attract British pensioners once Britain leaves the European Union and closer destinations such as Spain become less attractive.
Bryan Walker, 78, is one of those retirees attracted by Thailand's food and climate.
"It's just so good," said Walker, a former humanitarian aid worker who is considering a number of retirement facilities in the north of Thailand. "I've lived and worked in so many countries. Here the cost of living is wonderful, the climate is superb, although it's a bit hot at times. But the range of food is like nothing I've ever experienced," Walker told Reuters.
Peter Brown, owner of the Care Resort Chiang Mai, a care facility in the northern Thai city, set up his business after seeing his mother in a care home in Britain.
"I found problems in how they do care. Basically, not enough nursing staff," he said.
"I decided on a better way to do this."
The resort began operation in 2012 and around half the guests are now from the United States, he said.
An all-inclusive stay, not including medicine, costs around $1,500 a month.
"A lot of Americans are not getting healthcare free," he said, emphasising the importance of Thailand's service culture as a draw.
"You can see it everyday in the way the staff interact with the elderly."