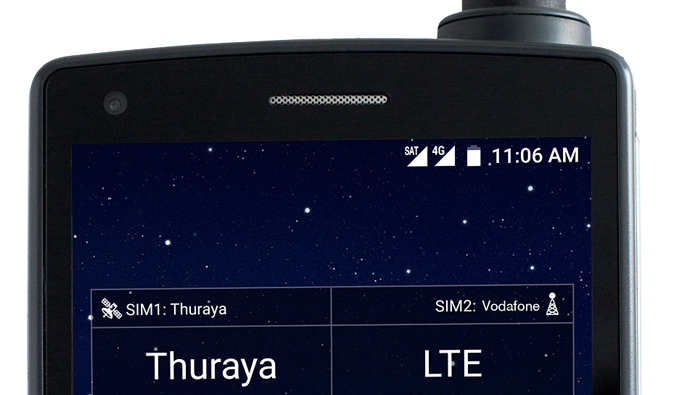 Muscat: Thuraya Telecommunications Company unveiled the world’s first satellite smartphone during its partner conference in Dubai. The Thuraya X5-Touch runs on the Android Operating System and has a 5.2” full HD touchscreen. It targets users who frequently move in and out of terrestrial coverage across a range of market sectors, including government missions, energy projects, enterprise communications, and NGO deployments. The phone offers fast and simple connectivity on the move, in remote areas, normally beyond the reach of smartphones.
The Thuraya X5-Touch is a step closer towards complete convergence between terrestrial and satellite communications through its full dual-mode and dual-SIM capability. It has two SIM-card slots for full user flexibility, and with the dual-active mode, it has the ability to have both its satellite and GSM (2G, 3G, or 4G) modes “always on”, simultaneously.
To cater to the needs of users in harsh and remote conditions, the Thuraya X5-Touch comes with a Gorilla glass display, is the most rugged phone in the MSS industry with anIP67 standard for full dust and water protection, and complies with MIL standard. It also has a host of advanced features and functionalities, including a high-capacity battery for extended talk time and standby time, a built-in SOS button and a front and rear camera.
Ahmed Al Shamsi, acting Chief Executive Officer at Thuraya, said, “Today, Thuraya reached a new milestone by introducing another innovative and groundbreaking product to the MSS market. Building on the heritage of a long line of successful satellite phones, this new development focuses primarily on delivering a unique and more interactive experience to our customers.”
“With the Android platform, there is already a multitude of apps readily available to work on the Thuraya X5-Touch, and developers will have easy access to develop and customise apps according to the needs of their customers. It complements the “Bring Your Own Application” (BYOA) concept; customers have the flexibility to download any app of their choice, thereby breaking the paradigm and revolutionising the way the satellite handset will be used,” he added.
The Thuraya X5-Touch is equipped with GPS, Glonass, and BeiDou systems for advanced navigation and tracking functions, which are important safety features during critical situations and comes with Wi-Fi, Bluetooth, and NFC.
“The Thuraya X5-Touch is a game changer and a big step forward in design and functionality placing it in a league of its own,” said Alexander Lachner, Director of Voice Services at Thuraya. “Creating smarter satellite phones is our constant goal and we are happy to offer our customers a new user experience that many in the industry have been asking and waiting for.”
The advanced omni-directional satellite antenna on the Thuraya X5-Touch ensures uninterrupted communication, offering seamless walk-and-talk functionality even in satellite mode. Thuraya’s comprehensive satellite network provides reliable, clear and uninterrupted communications in more than 160 countries across Europe, Africa, Asia and Australia; and in terrestrial mode, the Thuraya X5-Touch supports most 2G/3G/4G frequencies across the world. The phone works either with Thuraya SIM cards, GSM SIM cards or a combination of both.