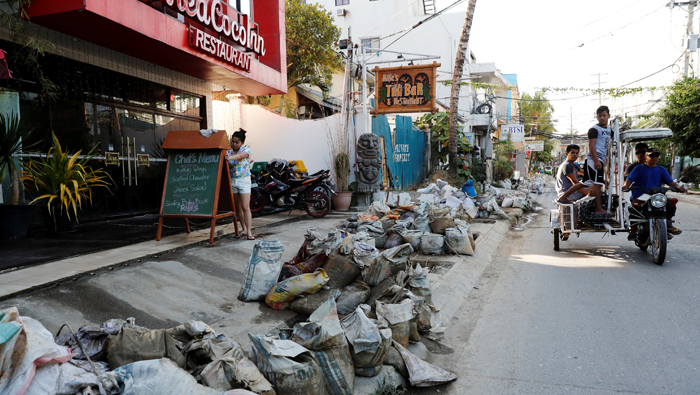 Manila: The Philippines is looking to shorten the closure period for its most popular holiday hotspot Boracay to four months from six, but the number of visitors allowed when it reopens will be slashed, the tourism minister said on Wednesday.
A masterplan to redevelop Boracay, which has turned into a "cesspool" due to pollution according to President Rodrigo Duterte, into a liveable and greener community will be finalised after its rehabilitation, Tourism Secretary Wanda Teo said.
"I think we can do it (cleanup) in four months. That's why we wanted it (to be) total closure, for us to do it fast," she said in an interview with ANC news channel.
Boracay, which will be closed to local and foreign tourists from April 26, has joined other beach resorts across Southeast Asia facing growing pressure due to a surge in visitors.
The government wants to save the tiny island that generated 56 billion pesos, or over $1 billion, last year but cannot cope under the strain of two million tourists a year.
When it is reopened, Teo said the number of visitors to Boracay, which a decade ago was found to be capable of accommodating only about 25,000, will be limited.
The number of people on the island now tops as high as 75,000, she said.
The environment is undertaking a study to determine the island's "carrying capacity", she said.
The rehabilitation involves the demolition of more than 900 illegal structures, improvement of waste management, and expansion of drainage and sewage systems.
Boracay, on the northern tip of the central Panay island, is home to more than 30,000 people and about 1,800 businesses, including global hotel chains like Shangri-La and Movenpick, and locally listed companies Megaworld Corp and Manila Water Co Inc.
Boracay is popular for its sugary white sand and lively night scene, but some 195 businesses there were found to be discharging untreated waste water into the sea, resulting in increased concentration of human faeces along the beaches.
Boracay generates 90 to 115 tonnes of trash a day, of which only 30 tonnes are shipped out regularly to a landfill on a nearby island, Teo said. Teo expects foregone revenues from the shutdown to be at "around 7 billion pesos", or even lower if the closure period is shortened to four months, she said.