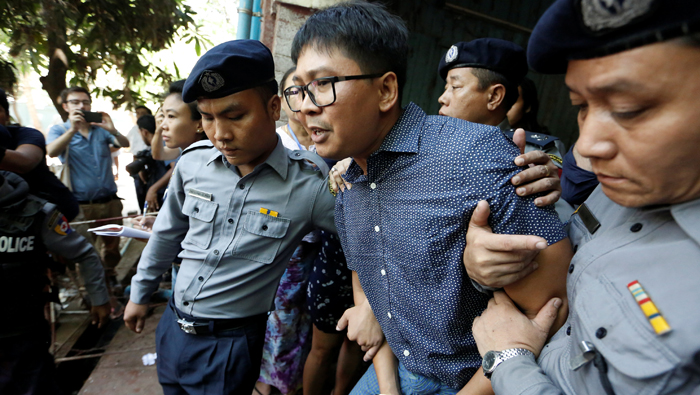 Yangon: A judge on Wednesday rejected a request for dismissal of a case against two Reuters reporters jailed in Myanmar after being accused of possessing secret government papers.
A court in Yangon has been holding preliminary hearings since January to decide whether Wa Lone, who turned 32 on Wednesday, and Kyaw Soe Oo, 28, will be charged under the colonial-era Official Secrets Act, which carries a maximum penalty of 14 years in prison.
Judge Ye Lwin said there was "a proper reason" for the accusations against the two reporters and therefore "they should not be released."
The judge said it wasn't yet time for the motion to dismiss because he wanted to hear the eight remaining prosecution witnesses out of the 25 listed, according to the reporters' defence lawyer Khin Maung Zaw.
In a statement, Reuters President and Editor-in-Chief Stephen J. Adler said: "We are deeply disappointed with the court’s decision."
He added: "We believe that there are solid grounds for the court to dismiss this matter and to release our journalists. Wa Lone and Kyaw Soe Oo were reporting on issues in Myanmar in an independent and impartial way. They have not violated any laws in the course of their newsgathering and were simply doing their jobs. We will continue to do all we can to secure their release."
Defence and prosecution lawyers made legal arguments in front of the judge a week ago, after the defence filed a motion to have the case thrown out two weeks ago.
The reporters' lawyers had argued that the testimony from witnesses called by the prosecution was insufficient to charge the pair.
They also pointed to what they said were inconsistencies in witness testimony and procedural mistakes made by the authorities during the arrest and subsequent searches.
Lead prosecutor Kyaw Min Aung had argued against the dismissal of the case, reiterating the prosecution's position that the documents that the police say the reporters had in their possession were secret and that the court could assume they intended to harm the security of the country.
On Wednesday, Kyaw Min Aung left the courtroom before reporters could ask him for comment on the ruling.
Myanmar government spokesman, Zaw Htay, could not be immediately reached for comment.
He has previously told Reuters that under Myanmar's constitution the courts were independent and has declined to comment on the case, citing ongoing court proceedings.
Wa Lone and Kyaw Soe Oo have been in custody since their arrests on December 12.
Wednesday's hearing drew one of the largest crowds of diplomats and journalists since the start of the proceedings.
The courtroom was packed, with diplomats from France, the European Union, the United States and Japan among those attending.
Some reporters from local and international media brought birthday cake for Wa Lone who blew the candles out on the way to the courtroom. Wa Lone's wife Pan Ei Mon, who is pregnant with their first child, broke down in tears after the hearing, telling journalists, "Wa Lone told me 'not to expect too much' but I'm always expecting as his wife."
She added: "I want them to be released as soon as possible. I'm so tired of pretending that I'm okay in front of my husband. I'm so tired. I don't want to pretend any more."
The two Reuters journalists had been working on a Reuters investigation into the killing of 10 Rohingya Muslim men in the village of Inn Din, in western Myanmar's Rakhine state, during an army crackdown that has sent nearly 700,000 people fleeing to Bangladesh.
Seven Myanmar soldiers have been sentenced to "10 years in prison with hard labour in a remote area" for participating in the massacre, the army said on Tuesday.
"The culprits who committed the massacre were sentenced to 10 years in prison. However, the ones who reported on it - us - are accused under a law that can get us imprisoned for 14 years," Wa Lone shouted to reporters on the steps of the court, before being pushed inside a police pickup truck.
"So, I'd like to ask the government: 'Where is the truth? Where is the truth and justice? Where is democracy and freedom?'"
The two reporters have told relatives they were arrested almost immediately after being handed some rolled up papers at a restaurant in northern Yangon by two policemen they had not met before, having been invited to meet the officers for dinner.
Police witnesses, however, have said the reporters were stopped and searched at a traffic checkpoint by officers who were unaware they were journalists, and found to be holding in their hands documents relating to security force deployments in Rakhine.
In its argument, the defence said the papers contained only publicly available information and could not be deemed secret.
The next hearing will take place on April 20.