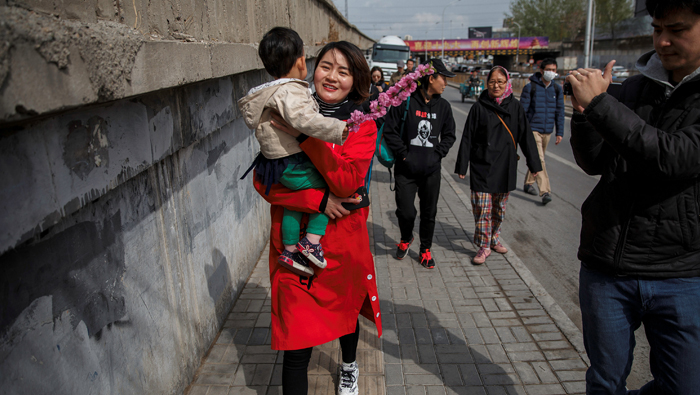 Beijing/Hong Kong: Chinese authorities are holding the wife of a detained Chinese rights lawyer in her Beijing home after they cut short her protest march aiming to force authorities to explain his arrest, a friend said on Wednesday. Li Wenzu's husband, Wang Quanzhang, who took on sensitive cases of complaints of police torture and defended practitioners of the banned Falun Gong spiritual movement, went missing in August 2015 during a sweeping crackdown on rights activists. Most cases from that summer, known as the 709 cases for the first day of detentions on July 9, have concluded, but Wang has been held incommunicado for more than 1,000 days, spurring Li's plan to march 100 km (62 miles) to the nearby city of Tianjin, where she believes he is being held. On Tuesday, the seventh day of her march, Li was picked up by plainclothes men and returned to her home in Beijing which they are now preventing her from leaving again, Li and her supporters said in a statement sent to Reuters. "Li Wenzu has been placed under house arrest, with state security blocking the door," said Wang Qiaoling, a friend of Li's, whose husband is also a rights lawyer. Reuters was unable to reach China's state security authorities to seek comment, in the absence of a website or publicly listed contact information. Video images sent to Reuters by Li's supporters showed a hectic scene on Wednesday, with some plainclothes men swearing at Li's friends and trying to block them from filming a gathering of about 30 people in the road outside her flat. "My husband has been held for over 1,000 days and I don't know if he's even alive or dead. I went to find my husband - what have I done wrong?" Li shouts from behind the grille of her small balcony, in a clip taken from inside the flat. Since coming to power, Chinese President Xi Jinping has strengthened efforts to quash dissent, with hundreds of rights lawyers and activists detained, and dozens jailed. The couple's fate was a test of China's assertion it is governed by the rule of law, said Kwok Ka-ki, a Hong Kong lawmaker who organised a protest on Tuesday over their plight outside Beijing's representative office in Hong Kong. "Xi Jinping always declares to the world that the Chinese government is ruling by law. What kind of law will (let) a country detain a human rights lawyer without any obvious reason?" he asked in Hong Kong.