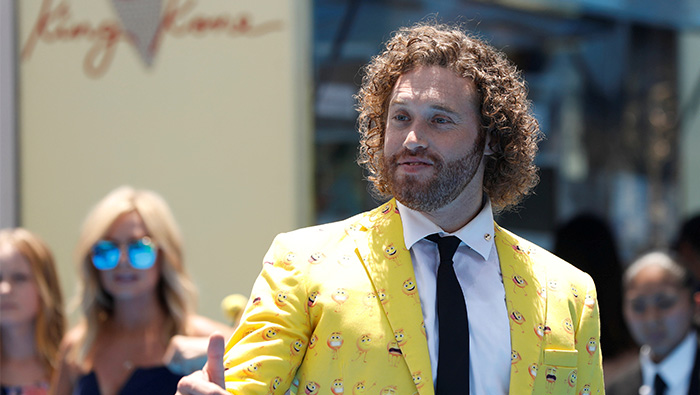 New York: Former "Silicon Valley" star T.J. Miller has been charged with making a fake bomb threat while travelling on a train headed for New York, the FBI said on Tuesday.
Miller, 36, who played the egotistical tech entrepreneur Erlich Bachman on the HBO satire about the high tech community, could face up to five years in prison if convicted, the FBI and the Connecticut U.S. District Attorney's office said in a statement.
Representatives for Miller, who left the television show last year, did not immediately return a call for comment.
The statement said the incident took place on March 18 and that Miller made an initial appearance in U.S. federal court in New Haven, Connecticut, on Tuesday where he was released on a $100,000 bond.
The actor was charged with intentionally conveying to law enforcement false information about an explosive device on a train.
According to the criminal complaint, Miller was traveling from Washington D.C. to New York on March 18 when he called 911 and reported that a female passenger "has a bomb in her bag".
Amtrak officials stopped the train when it got to Connecticut, told passengers to get off and bomb squad officers searched the train but found nothing.
Miller had earlier been removed from the train in New York because he was drunk, an Amtrak attendant told investigators. The actor had also been involved "in hostile exchanges with a woman who was sitting in a different row" in the first class car.
Investigators contacted Miller by phone in New York and asked if he suffered from mental illness, the complaint said. Miller replied, "No, absolutely not. This is the first time I’ve ever made a call like this before. I am worried for everyone on that train. Someone has to check that lady out."
Miller left "Silicon Valley" last year after four seasons for what were described at the time as creative differences with the show's producers.
He recently appeared in Steven Spielberg's movie "Ready Player One" and will next be seen in superhero movie "Deadpool 2" due out in May.