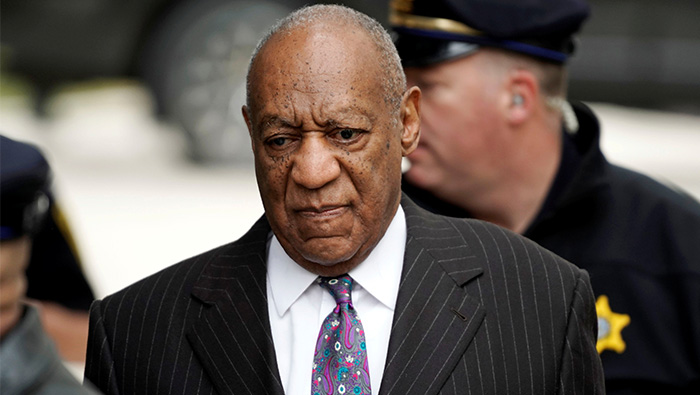 Norristown: One of 50 women to accuse comedian Bill Cosby of sexual molestation told a jury on Tuesday he gave her spiked wine that kept her stupefied for four days in 1984, and she awoke to find him naked and attempting to force himself on her.
Heidi Thomas, an aspiring actress who met Cosby for career coaching, testified in a Pennsylvania courthouse in Cosby's retrial on charges of sexually assaulting another woman 20 years later.
Thomas was reading a monologue of a character who was drunk, so Cosby persuaded her to drink white wine. She said she recalled "only snapshots" of the next four days.
"The next thing, I remember waking up on a bed. I have clothes on, he did not. I was lying down. He was forcing himself in my mouth," Thomas said.
The 80-year-old entertainer, once known as the wise and witty father in the 1980s television hit "The Cosby Show", remained expressionless during her testimony, often staring at the ceiling.
Cosby has denied wrongdoing, saying any sexual contact was consensual.
Although some 50 women have accused Cosby of sexual assault, all but one of the incidents were too old to be prosecuted. Cosby only stands charged of aggravated indecent assault of Andrea Constand, now 44, in 2004. He faces 10 years in prison if convicted.
Cosby's first trial ended in a mistrial in June when a deadlocked jury failed to reach a verdict.
Between the trials, U.S. popular culture was shaken by the #MeToo movement, which encouraged an increasing number of women to step forward with stories of sexual harassment or assault at the hands of the rich and powerful.
Earlier on Tuesday, Cosby's lawyer opened the defense's case by portraying Constand as a "con artist" bent on extorting money from the famed comedian, saying she concocted a false story to pay for her education and set up a business.
"She was madly in love with his fame and money. She's now a multimillionaire because she pulled it off," defense attorney Thomas Mesereau said of Constand, who won a $3.4 million settlement from Cosby in a civil lawsuit in 2006.
At the first trial, only Constand and one other accuser testified as Montgomery County Judge Steven O'Neill refused to allow others to take the witness stand. But this time around, he is allowing up to five of them to testify in a major setback for Cosby's defense.
Thomas was the first, telling the court she wanted a career in musical theatre and retained an agent. At age 24 and working at the Country Dinner Playhouse in Denver, she jumped at the chance to be mentored by Cosby.
She said she flew to Reno, Nevada, to meet Cosby, who was then appearing at Harrah's casino. Picked up by Cosby's driver, she was taken to a ranch far out in the country, where the assault occurred, Thomas said.
Cosby's defense team briefly cross-examined Thomas before court adjourned, withholding contentious questions, but will resume cross-examination on Wednesday.