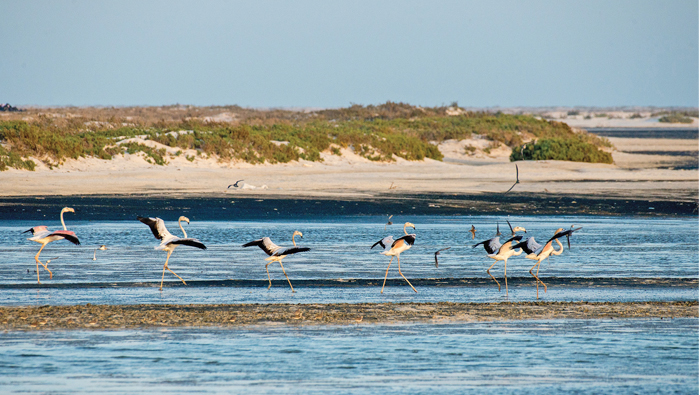 Muscat: More than 300,000 birds of about 80 species migrated to the wetlands on the coast of Oman, a new survey has revealed.
The study was the first full spring migration count of the wetlands in Al Wusta governorate of which Bar Al Hikman peninsula is a part.
The survey was conducted by Wetlands International, a global not-for-profit organisation dedicated to the conservation and restoration of wetlands.
It was done in partnership with the Ministry of Environment and Climate Affairs and Shell Development Oman.
The wetlands reserve in Al Wusta was declared as a nature reserve by a royal decree. It was also recognised as an Important Bird Area (IBA) by Birdlife International.
Ward Hagemeijer, programme head of business and ecosystems at Wetlands International said that he birds visited Oman for the same reason people found the Sultanate to be an attractive location.
“It is safety. These are open flats. The birds can spot predators from far away. Rarely, they face a threat from foxes. But the predators are easily seen. All other such wetlands in the region have been developed, so the number of birds coming here is understandable,” he said.
Some of the species that visited the wetlands are Curlew Sandpipers whose numbers have increased by four times in the area in March as compared to January, Crab Plovers whose numbers have decreased by 90 per cent, the Lesser Sand Plover which saw it’s numbers drop by 80 per cent and Dunlin which is 50 per cent less in number now. Large gulls and Cormorant were also far less numerous than in January.
The numbers are explained by winter drawing to a close and birds leaving while others that wintered farther south stopping over at the wetlands. A comprehensive report on this survey will be filed later this year.
“This survey has produced critical information for successful management of Wetlands Reserve in Al Wusta Governorate and has brought the effective conservation of the treasures this area holds a step closer.
“An effective conservation management of the wetlands is a puzzle with many pieces. A few are already known and this March 2018 survey has added a new one. Several more pieces are still waiting to be looked into,” Hagemeijer said.
‘First of its kind study’
Further, Hagemeijer explained that while earlier work of Wetlands International confirmed the international importance of the Wetlands Reserve in Winter while 2018 was the first year that such complete survey was undertaken during the Spring Migration.
Muna Al Shukaili, general manager, external relation and Social Investment Lead at Shell Development Oman said that her company was glad to be part of the intiative.
“Barr Al Hikman is truly a pristine jewel and with biodiversity under threat around the world. We are proud to be working in partnership with the Ministry, Wetlands International and a host of experts to achieve shared goals of protecting, conserving and managing natural habitats and critical ecosystems in Oman,” she said.