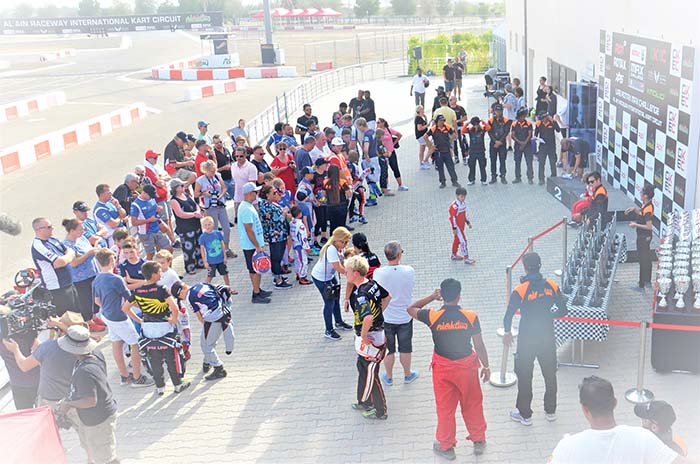 Shonal Kunimal was able to hold the steering wheel before he could walk, and today, at just six years of age, he is shocking the region’s racing circuits with seven first-place finishes in 16 competitive events.
The most decorated “bambino” category (aged 7-9) driver in the Middle East was recently named the 2017-2018 Overall Champion of the Rotax Max Championship. The title cements his domination over a sport he has loved since he first encountered it as an infant.
As a baby, he was known to play with toy cars, preferring anything with wheels. Years later, he would take his first steps as a driver at the Muscat Speedway Track.
Both, his father Shojai and Oman Automobile Association mechanic Sonny Lozano watched as he breathlessly set off like a rocket, blowing past drivers much older than himself. From that moment on, they knew he was born to race. Shonal would go on to win a string of first place finishes, eventually leading both Oman’s national kart racing sweepstakes and regional events such as the IAME X30 Challenge and the RMC Championships. A first-grade student of the Al Ghubra Indian School, Shonal was not only the youngest driver in his category, but quickly asserted himself as the one to beat.
**media[856111]**
By the time the dust settled over the racetracks in the Sultanate and the UAE, Shonal had finished in first place four times, in second place three times, and third, once during the eight rounds of the Al Ain Raceway’s Bambino Championship International, adding yet another jewel to his racing crown.
So what does the future hold for Oman’s very own mini-Lewis Hamilton? Only time will tell. But one thing seems certain: it’s bound to involve more trophies, more chequered flags and podium finishes for the racing prodigy.